“The Lighthouse” is an upcoming indie horror game developed by Shadow Knights Studio. This music review was requested by the lovely Mimi Page herself, which I hope this review does well.

I real quick wanna thank Shadow Knights Studio for the opportunity of purchasing the physical copy of the soundtrack, SIGNED by the lovely Mimi Page herself. 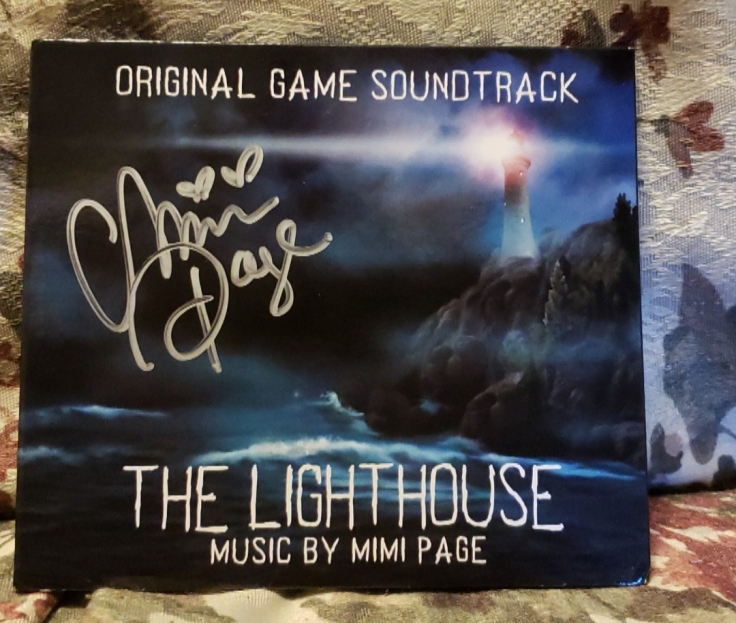 Now for those that don’t know Mimi Page that well (like myself), then here’s just a little bit of who Mimi Page is. Mimi Page was born in Los Angeles, California on February 2, 1987. Page was raised by her mother Cheryl Clark, a “triple threat” dancer who performed and toured in acclaimed Broadway shows Chicago, A Chorus Line and Pippin. From age 2-5, Page accompanied her mother on multiple international tours. On her early years, Page reflects;

“We pretty much lived as nomads in hotels and on the tour bus. I’d rehearse her lines with her which helped me learn how to read. I attribute a lot of my creativity to my childhood as I was constantly surrounded by music and dancing.”

Page then relocated to a suburban area of Las Vegas to begin grade school and attain a stable living environment. At age 5, she began composing on the piano. At age 11, Page returned to Los Angeles. At 16, she transferred to the Alexander Hamilton Music Academy to pursue her training on the piano. She continued to compose instrumental music, but concealed her desire to sing due to shyness. Page shifted her artistic focus dramatically when discovering the Electronic Music program at the school. After learning to digitally record and manipulate her vocals in class, Page began recording and producing her own original music. During her senior year of high school Page self-released a collection of the songs recorded in her class and publicly shared them on Myspace. In 2006, Page attended college at the University of California, Santa Cruz to further her studies in Composition and Electronic Music. In 2007 she left the university and moved to Hollywood to study recording engineering at Musician’s Institute. On the shift of studies, Page says

“I wanted to get away from the formal structure of classical music and learn more of the techniques of recording. It’s really tough when you’re an up and coming artist to afford studio time, so I wanted to be able to cheaply build my own studio and produce my own albums.”

During this time, Page continued to upload original music through Myspace, YouTube, and Facebook, which were all recorded and produced in her studio apartment.

Since the beginning Mimi Page’s music as appeared in films, games, tv and more. Do you think you may know her sound? Here’s a link to see everything she has done. 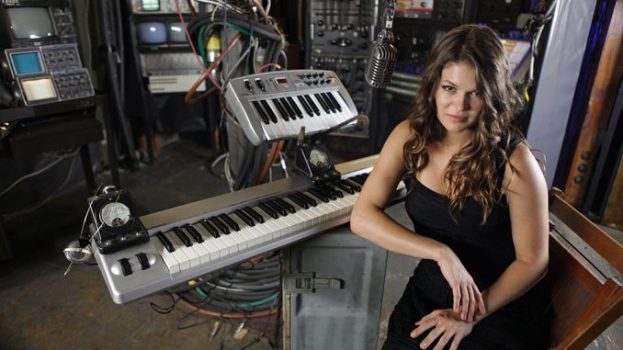 Her latest release is for the documentary from Ghost Adventure’s own Zak Bagans “Demon House”. Featuring 30 tracks available now. 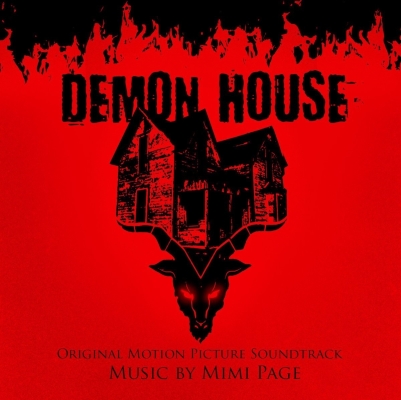 Check out all the information and trailers for Demon House here.

I’m gonna be reviewing “The Lighthouse” Original Game Soundtrack track by track. Explaining why I like, love or feel could have been. While showing off the beautiful artwork by Daniah Mandegary. So let’s get right into this!

Lily’s Lullaby: It starts off with this beauty, a touching lullaby and a sound only as if something wrong happened. Within the artwork you’ll notice a gravestone for Lily. Sounding tune that makes you wonder, was this the last thing she heard? Just the beginning should hit you home with a feeling of sadness.

The Lighthouse (Main Theme): The main theme is something you’d expect a much more happier tune but with a fast pace from the instruments that breath a life within the atmosphere. Even though this isn’t a long theme, it still shows the magic behind the lighthouse.

Hide and Seek: This track is personally one of my favorites, the way it starts of slow and then eventually makes it’s way to a melody of adventure. Just listen to those keys around 1:10 that carries you away while you sink into a hidden place yet to be found.

The Fading Wallflower: I know from forums, and especially from SKS Discord that lots of people are grabbed within this song itself. Maybe because it’s just the right sounds of relaxing that even nature would be fading away from the quietness and calmness that is the fading wallflower.

Mourning Rain: Only a 48 or so second track, that makes you wonder. Did Lily’s parents give in to the loss of their daughter? And only the sound of rain is left within the heads to quiet their thoughts? You’d have to hear it to understand.

Detective Irvine: Here we must be meeting a new character, filled with trumpets, and a eerie sound that echoes with the haunting keys. Who is Detective Irvine? And how come the sounds of the trumpets seem to have a role played within the song? I guess, we won’t know until it releases. But rest assured, “Detective Irvine” is here to help.

Hysteria: Now this part of the soundtrack, will start to tear at your soul. As if the damned souls of the lighthouse are coming to spook you. Hysteria is just one of those kind of feelings. With the haunting moaning of whom I assume is Mimi Page, as she is known to do narratives or some kind of sound of her powerful voice to grip you in your seat and hold you till the end. 1:34 time is a perfect example of the high pitching sounds of “souls” coming for you.

The Alters Waltz: Violins seem to take a great part within the beginning, lighting the alters, finding yourself feeling as if lost. Maybe even hopeless, even though alters are used for sacred places. Maybe something much sinister here is waiting for you, more haunting eerie sounds play within the creepy music that Mimi Page just basically “leaves” you in a dark room and surround you with just the lights from the ever glowing alters. The entire track is just one ride you won’t forget.

Mirrors: What makes Mirrors so creepy? Is it because you never know who or what exactly is staring back. Are you even real? To me that’s what this piece reminds me of, just sit back and listen to the atmosphere just alone. Then afterwards, can you face the mirrors normally again?

Tender Torture:  A very “disturbing” sound comes into play here, as if you stepped into another world. Surrounded with creatures and running for your life. That’s the idea I get from the sounds of the heavy yet pacey length of something bad is here.

The Descent: Ghostly sounds, haunting atmosphere, what more could you possibly need? The track alone speaks for itself.

Clarity: One thing I can confirm is Mimi Page’s soft voice with the kindling fires of the piano / keyboards. My top favorite track has to be Clarity. So smoothly soothing with right amount of ghostly moans and most of all a haunting journey as you close your eyes to listen. Maybe it’s time to set yourself free from the tragedies. A must listen.

Realm of Illumination: Second to last song before the journey takes an end. I’m wondering with the music, does it illuminate the world around you? Do you feel as if freedom is now closer, or are your eyes tricking you. Maybe the soft moans within the soft music creates it’s own realm away from reality. What could possibly be waiting.

The Monster In Me: The finale of a 33 minute haunting journey, takes you into the body itself. We all have a monster inside, the question is. How far will you go to be set free? Probably the powerfulness track off the entire soundtrack, it’s like trying to fight your demons while traveling onto a dark road you wish you didn’t go on. Another hauntingly yet beautiful track you will instantly full in love with. Like the lyrics indicate down below “The love I thought was mine, lead me to the end of time. But rage and madness breathe, the life back into me.”

Good: Haunting music that sets the bar for the upcoming horror game from Shadow Knights Studio. This soundtrack is a must listen or have for your collection. Mimi Page also narrates The Monster In Me with a harmony that won’t get out of your head. Even though there isn’t one bad song off this soundtrack, in my own opinion, Shadow Knights Studio definitely found the perfect composer, to make a world for the game that has yet to be released. The use of the piano’s / keyboards is my automatic fall in love sounds, once I hear the keys it’s over, I’m a fan and that’s how Mimi Page won me over with her music. That is also how I had to give “Hope for the Haunted” EP a listen as well.

Conclusion: Even though this is just an amazing haunting journey of what is “yet to come”, I personally can’t wait to also see what Mimi Page will create next! However I have heard her music through the TV show entitled “Ghost Adventures” that features her song called “Requiem“. I just hope one day, we can get an original haunting album by Mimi Page herself to also help people like myself who LOVE Halloween, get more prepared. But as we wait for that, we have “Hope for the Haunted” EP and of course “The Lighthouse” to tie us over till then.