“When a brutal daylight massacre leaves them bound and gagged in a remote, abandoned warehouse, eight young West Texans soon realize their minutes are numbered.”

Watch the Full Horror Short of Doll Boy Above

Around 27 minutes short horror story, captured and placed into his house we watch a mother looking for her little girl with other people scattering as soon as the lady met her end of the hammer. Oh yes, pun intended. From there we see everyone else trying to find a escape route, or at least a way out.

Doll Boy resides, what seems to be an abandoned building that he covered with noisy objects, hanging shoes, and other gruesome things that no one would want to encounter. Sadly, that’s how others met the end of the hammer, or at least you think. 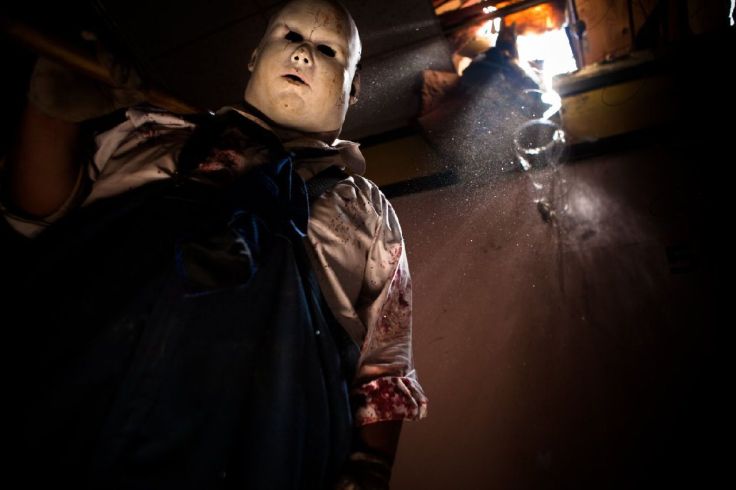 Brandon who we met in the next film, Circus of the Dead is complaining about his missing watch, which we learn more within the other film. However, I guess he’ll do anything just to escape. We can also add, Brandon uses practically 2 people as bait to escape his fate. Unfortunately, that doesn’t go to plan.

Doll Boy is a great short horror that shows once again spot on practical effects, especially from those that got hammered. It also shows the connection of how Brandon was already captured within the start of Circus of the Dead, making Doll Boy, one killer you don’t ever wanna run into.

On January 13th 2017, the next project hit the world. Circus of the Dead, written and directed by Billy “Bloody Bill” Pon with help from co-writer, Lee Ankrum. The film starred Bill Oberst Jr, Parrish Randall, Chanel Ryan and more.

“A man becomes entangled in a deadly morality game when the circus comes to town and a sadistic clown forces him to examine the things in life he takes for granted in the most horrific ways.”

To start this off I’m gonna say, this is one Circus you might want to just skip. Otherwise you’ll be like poor Donald and his family within this “delicious” nightmare. The way the film was written, Clowns that take pleasure of killing, fucking, and well eating or if not showing those the “way of the path” I’ll say for lack of a phrase.

From winning the prize to putting down there address on a piece of paper for “Government” use, the Clowns hunt and kidnap you down, or worse. Papa Corn, the leader and mind behind the clowns seek out those by cards. There not just any cards though, there like “bingo, but from Mexico.” as Papa Corn would say. Once a specific card is drawn or just skimmed through, if it matches up to someone or in this you, you might as well consider yourself dead.

Maybe I should add how fucked up these Clowns really are, especially when it comes to Papa Corn, who was acted by Bill Oberst Jr. Papa gets pleasure out of, well everything. If it involves raping, slitting, marking, torture or even sexual appearances, you’ll be finding Mr. Corn touching himself. If he isn’t chasing you bare bottom as well, oh yeah he does that too. Noodledoom, a large man with a mallet. You know the hammer you use to try ringing the bell, oh yes, you wouldn’t want to run into this particular Clown. Who loves to eat flesh of any sort, even your cut off tongue. Mr. Blister seems to be a chill out Clown that likes to play games, and only kills when needed it seems. Jumbo, he’s one clown you need to keep an eye on. He’s like a dwarf that could easily not be seen inside of a vehicle to end your demise. Pepe the Mime, well add Leatherface idea to this Mime and juggling and you should understand this Clown already.  Finally, Doll Boy, I wouldn’t say he’s a Clown, but someone who wears a Doll’s face as a mask and his choice of weapon, sledgehammer.

“Circus of the Dead will make you think, about visiting one again.” – Paul Dulski

You may be wondering the inspiration for Circus of the Dead, well maybe the beginning quote just might be the clue of this unnatural and fucked up circus that we witness, at least it’s on a screen and not actually inside of it. Because Papa Corn, may be watching you already while looking through his deck of cards for a match.

John Wayne Gacy, a real life serial killer who sexually assaulted, tortured and murdered at least 33 teenage boys and young men between 1972 and 1978 in Cook County, Illinois. Gacy became known as the “Killer Clown” because of his charitable services at fund-raising events, parades, and children’s parties where he would dress as “Pogo the Clown” or “Patches the Clown”, characters he had devised.

Circus of the Dead uses great practical effects with no CGI, as to what I can tell. It’s all practical and nothing added by computer. The kills are just bloody amazing, and the story, well let’s just remind you like I stated at the beginning. You might want to skip this one to spare your life, if not your entire families. Clowns, they’re suppose to be entertainment. We aren’t suppose to fear them, but then again Clowns can be scary. Don’t forget, watch past the credits.