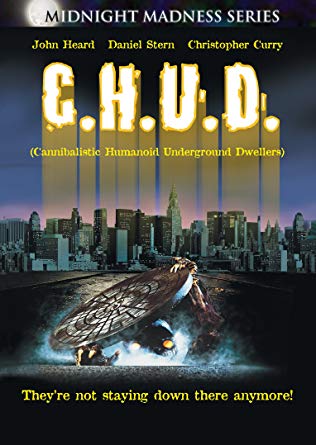 Just let that sink in for a moment before you even begin to understand the film. That alone has so much going on with it, and it can imply a lot. C.H.U.D. is directed by Douglas Cheek. Written by Parnell Hall and Shepard Abbott.

A.J. “The Reverend” (Daniel Stern) provides a welcoming sanctuary for the unfortunate homeless residents that are living underneath the streets of NYC. When strange occurrences begin, he goes to the only person who he thinks he can trust to help; Captain Bosch (Christopher Curry). Meanwhile, Bosch’s wife went missing, and he thinks it may have something to do with the disappearances. They get a lead when they discover a photograph taken by photojournalist George Cooper (John Heard). Now, it’s time for answers. A.J. and Bosch take their findings and concerns to the top guys, hoping to get an answer to all the fuss. The answer they get is not what they are expecting.

Creature-Features from the 80s are great. They are simple but bizarre at the same time. One has to have excelled the borders of imagination to have come up with a title like C.H.U.D. Morseo, the in-depth creature design of the underground dwellers. What’s comical is the tagline: “They’re not staying down there anymore!” As I make a sarcastic comment while watching the movie: “Well, you don’t say!” Yet, when you sit back and look at the posters and taglines for movies of the 80s and ever earlier decades, you can’t help but to smile. These are the times where the posters have so much storytelling in themselves. Visually appealing. Thought-provoking. Creative concepts. Innovation.

These are the times when even the posters didn’t brace you for what you are about to see. As you observe the poster art for C.H.U.D., you kind of see the creature sneaking out of the sewer. And you’re so engrossed with “What the heck is a Cannibalistic Humanoid Underground Dweller?”. Then you watch the movie and you think you know…until you see it. And you think; “What the heck is that?”. And right before the film confirms my speculations, I called it: “This is some messed up government experiment gone wrong. I just know it.” These kinds of movies are always about government experiments gone wrong. Well, guess what…they ain’t staying down there anymore.

The imagination to make art out of the bizarre is worth noting here, and definitely worth seeing.

NEW INTERVIEW: "Boston Metaphysical Society: The Book of Demons. It is a 41 page story in a 48 page perfect bound book and is a continuation of Ghosts and Demons. The story is about how Caitlin is kidnapped and forced to find and enslave a demon for a Great House. Samuel, Granville, and Alma are all back. It finishes up this particular story arc. We do have a brand new Boston Metaphysical pin featuring the Plague Doctor which seemed to be appropriate for the time. It was designed by Alejandro Lee and looks terrific." - @mcholly1
NEW INTERVIEW: Paul chats #VoodooChille @voodoochille_comic with Writer Casey (@robotseatguitar).