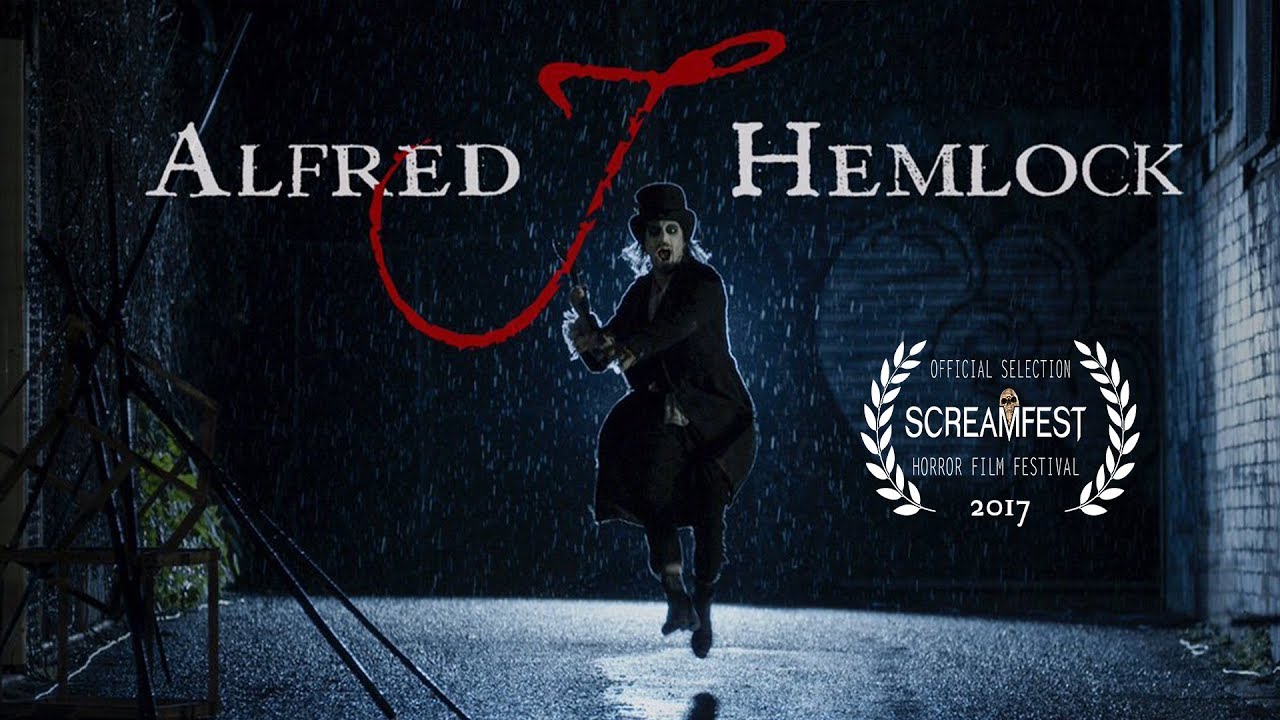 Directed by Edward Lyons & released in 2017, ‘Alfred J Hemlock’ is an award winning short indie horror film with an inspiring message which follows the tale of Emily and her experience in a dark alley. When Emily’s boyfriend abandons her in the night, her only way home is through an alleyway where she is terrorized by the mysterious entity Alfred J Hemlock. After reaching the depths of her despair she finds the strength that she never suspected she had.

The movie starts off with a couple arguing about an issue and the lady is abandoned in a dark shabby place of the town at night by her boyfriend as he drives off. She feels worthless and then in her vulnerable mental state, she starts seeing a strange man who introduces himself as Alfred J Hemlock. Without her mobile phone and not knowing her location, can she escape this strange man who is following her and talking to her about her feelings and life?

The film is paced well with no dull moments. The performances are brilliant with Tristan McKinnon as Alfred J Hemlock being the perfect inner fear, guilt and negative energy of every sad depressed person with the body language and dialogue delivery reminding us of various weird characters played by Hollywood actor, Johnny Depp. Renaye Loryman as Emily is a brave protagonist and Christian Charisiou as her boyfriend has performed the role of an angry and untrustworthy stereotypical boyfriend well. The movie has a very inspiring message about not allowing others to make you feel inferior or guilty. The movie inspires us to live the life with self- esteem and not get pushed over by people who don’t care for us as much as we do. The film maker has delivered a very strong message from such a short film that many film makers fail to do even with 3 hours of films.

The ending twist makes it a very logical story with a never ending loop for those who get lost in life and don’t know the purpose of life. Such inspiring and positive horror films are necessary in these times where horror can be wrongly associated with self-harm or being depressed. (Read out article about Instagram classifying the horror hash tag as suicide inducing- Click here) We have already seen some big name movies like Conjuring 2 having scenes and dialogues which encourage the viewers to never lose hope and love the family and friends when fighting an evil force or in the real life case, problems of our life.

So, in the end, I think that everyone and not just horror fans, should watch this film to get inspired and to see some stellar performances by the cast and the titular spirit of Alfred J Hemlock. It has some strong language when characters express their feelings but no blood, gore or suggestive/sexual content, which shows that you don’t need gore to make a movie scary or suggestive stuff to make people watch it. I hope that the film maker continues to spread positive messages through such films either through sequels or other experimental movies.  A great reminder that indeed, #HorrorIsHealthy and uplifting for mind. (Here’s our 100th Podcast episode where we discuss the horror and mental health-
https://ehpodcasts.com/2019/04/22/special-celebrating-100th-episodes-horror-is-healthy/ )

Thanks to the Screamfest YouTube Channel, we can watch the full 14 minutes film here:-

More information about the film:-

Synopsis: When Emily’s boyfriend abandons her in the night, her only way home is through an alleyway where she is terrorized by the mysterious entity Alfred J Hemlock. After reaching the depths of her despair she finds the strength that she never suspected she had.

Screamfest 2017 Page for this film:-
https://screamfestla.com/2017/film/alfred-j-hemlock

Thank you so much for reading! What do you think about this film? Please let us know in the comments below.

For more news & reviews about horror movies, shows and games, please support EHPodcasts by sharing this post, liking our Facebook page , following us on Twitter, subscribing to our YouTube channel and listening to our podcasts, now on many platforms given below:

4 thoughts on “REVIEW & Full Film: ‘Alfred J Hemlock’ is a Scary Short Horror Film with an Inspiring and Motivating Message.”