Into the Darkness Episode 1 starts off with a warning to those about to read the book. However Into the Darkness doesn’t act like any normal comic series, instead it’s more of a TV Show with 10 Episodes.

As it begins, it’s already a very cool art style with lettering that even go behind the scenes of what is going on. Managing to not drown out the action that has already begun with husband, running through the front door telling his wife “they’re here! Grab the kids and run!”

From here we see shadow people surround the place, and crashing through the window. After possibly defeating them all, it’s actually the end of this guy, as a sharp blade strikes through the back of his skull through the mouth. As the wife cries out, these unknown people head out to confront the wife, who has set the kids climbing through a dog hole a back door. 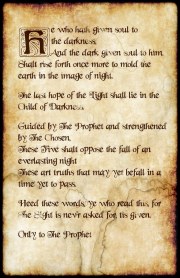 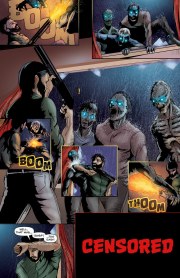 21 years later, we find a man who can see the unknown. Those “living” amongst us, however he can see past, present and sometimes future. This physic had a mission, to find Jennifer. Jennifer was the daughter of the couple mentioned above, who died trying to protect her.

Upon finding her, a witness seemed to have heard to much. Running to give details, both fled after him. Fast forward to a place called Crossfire, where Brian Harris fought three others. While being spied on, leaving the place with bouncer “Bloodshed”.

My final thoughts of Episode One, Into the Darkness. Artwork is well done, the color palette uses great shades to represent who or what is dead. While the pages with Crossfire, seemed a bit plaid? It felt to warm for a place called Crossfire, but maybe I’m not all the way following the idea.

The artwork gives a nice touch of realness, rather than some of the lazy doodles I’ve seen. Into the Darkness delivered a nice package of darkness of surprises waiting to be explored. 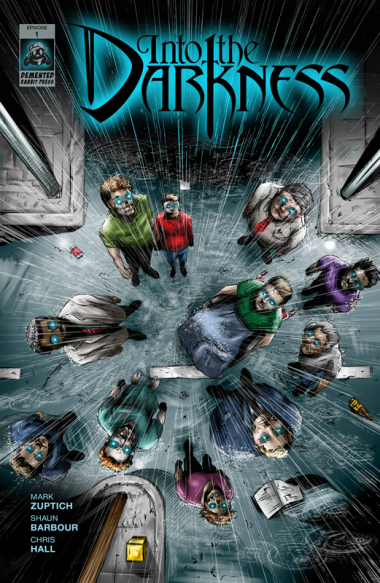 Purchase Into the Darkness

Mark is a former Graphic Designer born and raised in Cleveland, Ohio. Somewhere along the way, he ditched the design thing and became a Front End Developer and Marketing Manager. He initially studied Fine Arts at the University of Cincinnati’s DAAP program before earning his Bachelor’s in Visual Design from the Art Institute of Pittsburgh. Mark also has a minor in Creative Writing and loves telling stories. He has been voraciously reading comic books since childhood and drawing comic characters for almost as long.

Mark currently resides in Phoenix, Arizona with his wife and three personality-laden felines. His hobbies include reading both novels and comics, hiking, hitting the gym, video games, and anything involving LEGO or Disney. In his spare time, he speaks on behalf of the trees to combat over-production of thneeds and truffula tree deforestation.

Shaun works diligently on a daily basis to provide live-giving care to those in need, as well as to provide amicable living quarters and sustenance to the blood spawn of himself and his dark queen—in other words, he’s got a family and kids to take care of.

Shaun enjoys spending as much of his free time as possible contributing to the growth of our realm of Darkness and instilling fear upon the aforementioned blood spawn (for the love of…can’t we just say “kids”?–Mark). Aside from that, he enjoys kicking back and partaking in the tales of various fictional worlds, be they dramatic, horror, or comedy.

Seriously, this guy’s a ticking time bomb. He literally scares the crap out of us.

One thought on ““Into the Darkness #1” – Comic Review”

Melanie Light is an emerging British genre film maker. She lives in the vibrantly diverse and political city of Bristol, UK. She is known for her hard hitting, fantastically designed and admirably directed short films. Her ever popular film THE HERD, was invited to over 30 film festivals worldwide including Sitges, Fantaspoa and Leeds, and won numerous awards and received press from Fangoria and heavy metal magazine Metal Hammer, which reviewed the film’s notable score. Listen to @misartressmel over at http://ehpodcasts.com. Make sure to also visit her official website for her short films and more at http://melanielight.co.uk @womeninhorrormonth | @promotehorror #horror #animalrights #melanielight #womeninhorror #wihm #wihm11 #interviews #ehpodcasts #everythinghorror #podcasts
Happy #Valentines Day. Did you know we used to NOT have an intro? Look up our back catalogue, we never got one til late 2018 early 2019. #Horror #Podcasts #EHPodcasts #EverythingHorror