After waking up without memories, Amelia attempts to traverse a Shrieker
devoured New York to find her parents. Along her path she finds, Survivors, an abandoned home, and a Shrieker trap. Just in the nick of time, Amelia is rescued by her new fellow survivors Eleanor, and Ace. Together now they’ve set fourth into darkness to find refuge from the group of Shriekers hunting them. Only to find every thing they once knew has been long gone.

Interstate 18 (somewhere) starts Issue #2, as Eleanor from previous issue saved Amelia and Ace the dog. Trying to get a grip on reality, Amelia asks Eleanor how she was able to find them. Eleanor replies about tracking Ace since he was three.

Remaining calm and trying to get to safety Ace starts barking, immediately after Eleanor is trying to figure out what is wrong. The gigantic spider has jumped on top of the vehicle. 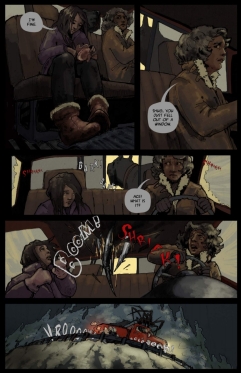 This situation with one of the monster’s of this universe is finally defeated, or surrendered and fled away. Eleanor gets the vehicle running again and they bolt it out of there.

We even get s glimpse into the past for Eleanor and what she kind of went through, when news first hit about the “end of the world”. It seems El, “got old” and wasn’t much of a carer and seemed to be hitting the bottle. 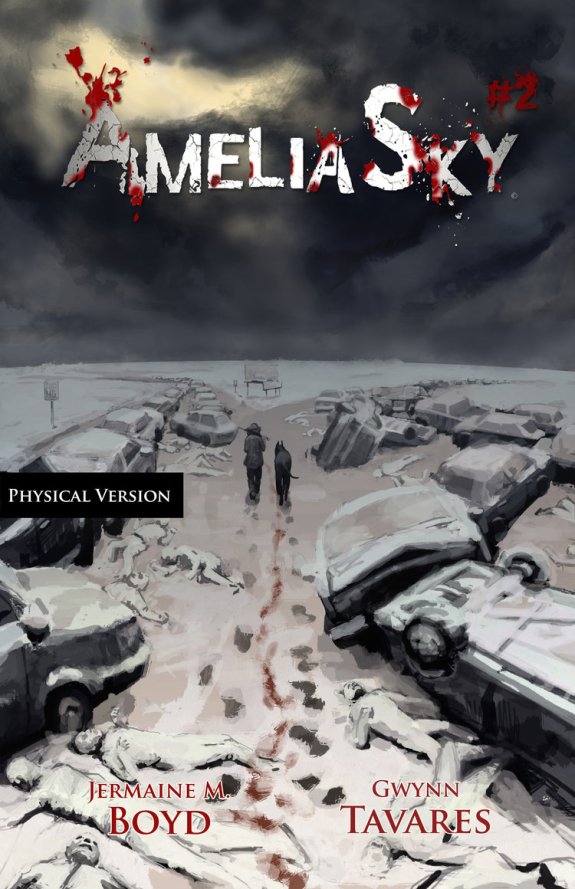 As we approach the ending here, with the abandoned NASA secret location of a possible evacuation pod. Amelia could be headed to safety, while Eleanor and Ace, stand for their final possible moments of being surrounded by many monsters.

But it seems Amelia has something more inside or should I say within her. As the escape pod crashes downward.

My final thoughts of Issue #2, artwork is very atmospheric and very detailed of what can be done. However, my only issue I found was the unnecessary dark text bubbles. I understand it’s trying to be part of the atmosphere, but I think it should be a normal text bubble, white background with black text.

For more information check out http://who-is-amelia-sky.com

Writer: Jermaine M. Boyd • Has been inspired by science fiction since he could remember. Having spent most of his childhood reading great works by some of his favorite authors Orsen Wells, Ray Bradbury, and Arthur C. Clark.

This love of storytelling gave way for a great love for writing short stories. Superheroes stories like Batman, Spiderman and Superman drove a young Jermaine to write his first story and many more after. Amazing storytellers catalyzed him to aspire to become a scriptwriter.

Illustrator: Gwynn Tavares • Started out her art career as a sculptor. After a few years working special effects on movies themed off of graphic novels she diced to go into sequential art. Majoring as an illustrator, Gwynn is also an accomplished comedian and lives on a sail boat in San Francisco Bay.

Editor: Brittany Matter • Is a comic book script editor. Like her heroine Carrie Fisher, she is a Script Doctor, and her scalpel is a proofreading pen. Brittany’s specialty lies in developmental editing for the following genres: sci-fi, fantasy, children’s and traditional literature, crime, noir, and horror (even though that last one scares the bejeezus out of her).

Letterer: Kuen Tang • Known as The Mighty Kuen, she is the first quadriplegic comic book letterer in the world to work for DC comics and first to wheel the Great Wall of China. On weekends, she turns into a Murderball player, adventure seeker and disability advocate. By night, fights the evil villain called “Inaccessibility” by creating comic strips that deal with disability issues.

Editor: Issue #1 – M.J Samm was born with secret aspirations to become the next James Bond. However since her lack of British heritage has pushed that dream aside she now spends her days as the girl who will never grow up. Having worked as a Producer for web-series such as “Lagged Out” as well as a Comic Journalist for Geek Legacy, she now spends her days as a freelance Comic Editor. Her experience includes working on comic strips, ongoing and mini-series from creators all around the globe whose work can be seen in IMAGE, IDW Publishing, and BOOM! Studios. Her background in successful crowd-funding comic projects (most recently UNLAWFUL GOOD)