Let’s get to know exactly what The Gentleman #1 is before diving into the review. According to their Kickstarter, The Gentleman #1 is the 3rd SFC Comic, comics solo series. This will be a a 32 page comic written by Greg Anderson Elysee of the graphic novel Is’Nana: The Werespider series, drawn by Massimialiano Veltri of Marvel Comics and Titan Comics, with colors by Marco Pagnotta of SFC and Kasai.

In this 4 Part miniseries, the Gentleman finds himself drawn to Espere St. Lanmé, mysterious and alluring, seeking help and protection from a being of possibly supernatural origins. Unfortunately to protect her, Oliver must succumb to his special abilities, a hereditary curse that uses his body as a key and vessel to the Void, an ancient evil with the means to destroy all life as we know.

Can Oliver protect Espere without losing his humanity? And if he can, can she be trusted? What is her connection to Oliver and the Void itself?

First off for The Gentleman, I’d like to say this is probably the first time, that I, have seen a comic using blocks to represent a narrator. As if the main protagonist is talking to himself in his own mind. For example as we see Oliver sitting down with a client that hired him, showing photographic proof of an affair, cheating. These few pages will help demonstrate exactly the narration and normal dialogue boxes. 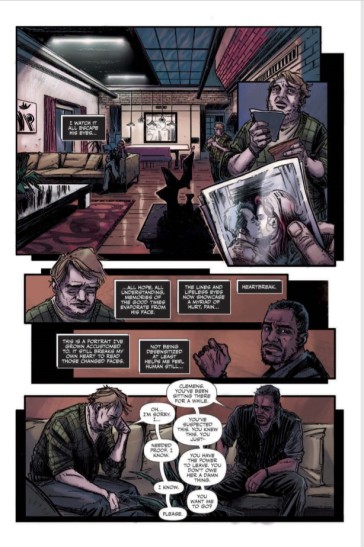 Which leads to the client committing suicide, not being strong enough to keep himself together. Or did he? It seems Oliver has a few tricks up his sleeve, it seems he’s able to telepathically send a shadow of himself to whomever. “She’s not worth it!” has Oliver acclaimed to the gentleman that was pulling the trigger and completely misses.

However, with Ralph and Espere. It seems besides trying to break into Oliver’s old apartment because something is after them. Oliver, as the title of the series is known becomes the gentleman and let’s Espere sleep in his room. Espere lights candles and draws protection throughout the bedroom before crashing to sleep. Also Oliver and Ralph used to be together, but separated. Seems like Oliver may be jealous of this woman, especially now that she is in there bed.

It seems while Oliver is trying to figure out who exactly Espere is, being interrupted by Simone Simon (his cat). Espere doesn’t realize that a void is forming right inside the bedroom, while the protection isn’t even working.

As the comic draws to the end, it clearly seems that Espere has something more going on than what is being said, there also was a mention of a “Cult” Oliver exclaimed but was shot down by Espere, feeling that Oliver has no idea what it “feels like.” However the real question is does Ralph and Espere even know Oliver that good of what HE can do?

My final thoughts about Issue #1 of The Gentleman, it’s got a cool idea, they embrace the sexuality of characters. The use of colors works here as like a Lovecraft touch, with some ordinary comic drawing feels, I definitely liked the idea of the narration boxes that fit well with the regular dialogue. Hopefully Issue #2 which was funded via Kickstarter, after a not so great start of Issue #1 with mail delays. Some people even warned others on their latest The Gentleman Kickstarter to not support these people. So I just hope we don’t see these issues come afloat again when receiving Issue #2.

Currently it seems to buy a copy is wait for their next The Gentleman Kickstarter, by simply following SFC on Kickstarter. By following, you will receive emails on future Kickstarter Projects once it goes LIVE.