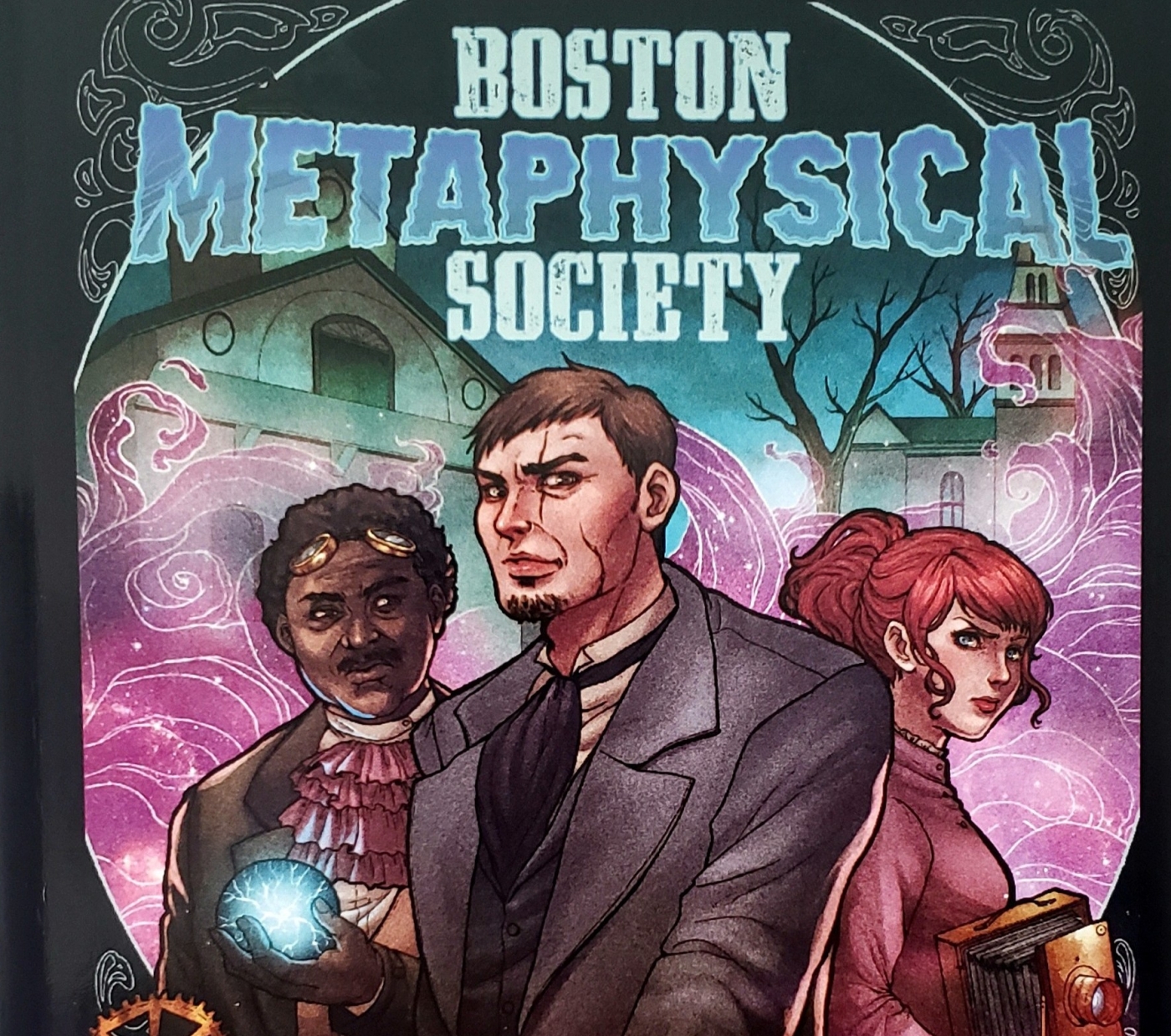 In this review I will be covering not only all six issues from the mini-series, but it also contains a BRAND NEW Boston Metaphysical Society ten page short story called, Hunter-Killer, and additional bonus pages. With art by Emily Hu and coloring by Gloria Caeli, the story is set at the beginning of the House Wars (my version of the Civil War) and features the crew of a prototype airship. I will be introducing three new characters: Gwen Warrick – Captain; Emmet Rochester – Navigator; and Joaquin Medina – Engineer.

Madeleine Holly-Rosing has created a unique story, set in the 1800’s where by using electricity and a hand held radio box. Can, kill a spirit. After Boston Metaphysical Society lost a member due to possible possession, the main protagonist is out searching for a recruit. Skilled enough to take on the job of hunting, photographing and killing spirits.

Madam Sullivan, daughter of the man who died in Issue #1 of the miniseries is determined to take her father’s place. Unfortunately it seems that the B.M.S. have no interest being responsible for not just her father’s death, but her death as well, however Ms. Sullivan isn’t taking no for an answer. As stubborn as one can be, when it comes to proving their worth. She follows, and eventually lends a hand in her first and only case.

Ms. Sullivan came with the box that was hidden from “sweet Duncan”, a spirit that came to Ms. Sullivan. Possibly her brother who passed on? Hiding the box from their mother, knowing that she would get rid of everything that belonged to their father. And handed it over to Granville, Hunter’s Scientist. It seems that plans might be changing for a bit, as a boy rushes in the Boston Metaphysical Society because a demon has come to kill them all. However, another problem seems to have come. Tons of magnets came forming together, creating a figure like shape walking down the road. Granville, Sullivan and Hunter fled into action, getting their device ready to end this magnetic creatures life.

Since this is also the 1800’s one of the characters we meet, is none other than Mr. Tesla. He and his team, creating a device to pinpoint exactly of a precious location of a entity could be in order to plan for the attack, or study. Tesla’s team seems to be interested in studying these entities, learning where they come from and how to send them back. While Hunter, just wants nothing to do with them but kill the spirits at whatever cost. It seems though both sides may have to work together in order to pinpoint and tackle these mysterious deaths and possibly plan better for future attacks.

We also learn that Hunter, is or was, doesn’t really clarify at the time that he was, is, a police officer. With that now in the knowing, this could be why Mr. Hunter wants nothing to do with studying spirits and only eliminating them. Because of the training and courses of a policeman.

Mr. Hunter was approached by Tesla, asking Hunter to come chat and learn about what can be done. Throughout the chatting and learning of Hunter’s Map. Tesla discovers that the spirit or “Shifter” they are after is attracted to violence, while Tesla has mad his known weapon. The plasma gun. Where Tesla demonstrates how he also made a structure or container device, that can trap demons and or spirits inside. Giving Tesla enough time to kill the also trapped demon with his plasma gun. Granville and Ms. Sullivan go and tackle a haunting inside of a theatre. However, like Ms. Sullivan is trying to explain to Samuel Hunter and Granville. Not all ghosts want to deal harm on people.

Another few things I want to point out to include to help who is who. First off, Samuel Hunter, the main protagonist of B.M.S. lost his wife, ironically her name was Elizabeth and was a medium. Mrs. Sullivan reminds Hunter in the best and worst ways of his beloved wife. A riot broke out in the middle of the street, Sullivan was able to witness seeing the Shifter with a blueish glow around him. Disguised as a regular male person.

Hunter’s wife Elizabeth’s father, isn’t to happy with Samuel Hunter, assuming this “Shifter” is the reason why his daughter died. However it seems that her father wants to see Hunter arrested and charged with killing his own wife. But as you and I know from me telling you and everything, we know (so far) that Samuel Hunter is not the killer. Unless there’s some twist down the road that the Shifter possessed Hunter and used him to then kill his wife, Elizabeth. It seems though now that after Hunter was questioned, Tesla wants to help in whatever needs possible. But when Tesla worked into the office of the B.M.S., it seems Tesla might have some sort of red aura, possibly something more sinister is going on with Tesla than we think.

Caitlin Sullivan, arrived home after Samuel Hunter explained that she no longer needed to provide her help since Tesla and him were teaming up to kill the Shifter. However, Sullivan’s mother found out what she really has been doing and dragged her into a church to be cleansed from the evil. It seems though Caitlin was able to not be cleansed, after an angry argument broke inside of the church walls between the Father and her mother. Granville wasn’t to fond with the fact that Hunter and Tesla teamed up, while Hunter had to go check out a possible case.

Upon arriving, it seems that this aunt was the only one hearing voices, seeing things, and on top of that, they wanted Hunter to solve what was going on before the grand ball started that very night. Once again though, it seems to be the perfect setup from Tesla, because protesters and with the ball happening. It was the perfect way for Tesla to attract this shifter. With the device to pinpoint the shifter, and Tesla’s plasma gun coming toward the place. Tesla was now determined to destroy the shifter, once and for all.

Tesla, now officially lost his mind. Just like Samuel who realized that he was blinded by Tesla’s madman mind, trying to kill and destroy the shifter at whatever cost, even if it meant other peoples lives. This violence did in fact draw out the shifter, here is where we learn the true meaning of why the Shifter was in this world to begun with, and what it was planning on doing. In the end, sometimes our guilt gets into the way and brings out the darker side if not summons something we don’t want. And as the first series comes to a close, this is how Caitlin Sullivan becomes a permanent employee of the Boston Metaphysical Society. 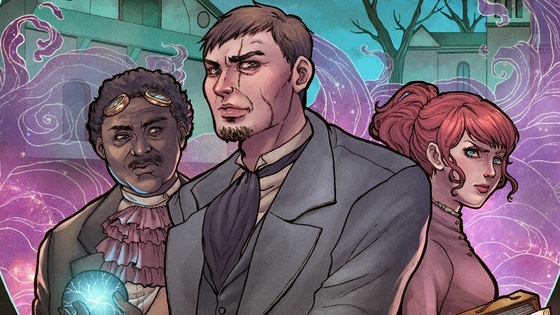 This is by far the biggest review I think I’ve done with a comic, however keep in mind this is a trade back filled with the entire 6 chapter miniseries, a bonus chapter and the first actual issue. With that being said, I felt to stop after miniseries issue #3. There really is a lot to take in. However my conclusion of Boston Metaphysical Society is definitely a must read. Madeleine Holly-Rosing and her team did an excellent job, placing together the beginning story of a interesting way of providing different angles of stories within this 1800th century universe. I definitely hope they play and try new things and different ways to really take this series into it’s own creation. The artwork, beautifully drawn and colored, as I believe heard painted pages. I really appreciated the fact that the dialogue boxes were just the right amount of dark at times, where I didn’t have to quench my eyes just trying to read specific parts. Boston Metaphysical Society is one you will want to join.

Bonus chapter I think I’ll leave out, but however brings a nice prologue to the whole story, and it’s just better to really read the whole miniseries trade back book yourself.