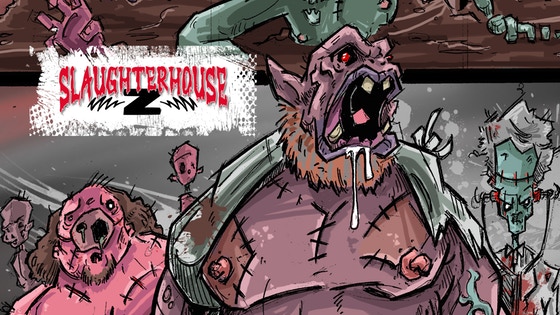 Right now on Kickstarter there’s a project that needs your help. SLAUGHTERHOUSE Z by Hellbound Media UK is at 51% with only 15 Days to go.

A secret genetic experiment has combined the DNA from a hulking serial killer, with a brutal breed of pig, to create a terrifying hybrid monster. “Porker X” quickly escapes from the secret lab where he was created and, alongside his prototype hybrids, wastes no time in carving a swathe of carnage throughout the Welsh countryside. It gets worse. The dead are rising, hungry for flesh, and Porker X leads this Army of the Porcine Dead in their unstoppable slaughter!

Caught up in the terror are brides-to-be Roxy and Serenity, enjoying a bit of seclusion, sex, and steampunk erotica, on the night before their big day. However, when Porker X turns his undead eye on their cabin, these two will have to fight for their lives. Can they survive or will it be a Wedding Day of the Dead?

Hellbound Media are a small press comic production team, owned and edited by Mark Adams and Matt Warner. We’ve worked with a whole range of artists, and sometimes other writers, from across the independent horror scene to produce a range of comics, stories, films and artwork – from the spooky to the grotesque!
“Slaughterhouse Z” is the brain child of Matt Warner, writing with his friend A. J. Ballard, and represents their own take on the grindhouse horror aesthetic. Whilst this three-part mini series stands alone, and can be read as a self-contained horror comic, it is also part of the wider “Slaughterhouse” world the two of them have created. “Slaughterhouse Farm” was their first collaboration, and featured a group of troubled teenagers heading to Snowdonia for a team-building camping trip with their social workers. Their van soon broke down, and the monstrous Pigf**ker began to dispatch any that he came across.

The series was intended as a single four-issue storyline, but it has been one of Hellbound Media’s biggest successes and so we looked to see what new stories could be told with the same old-school video nasty vibe. Thus two sequels were conceived, the more direct continuation of “Slaughterhouse Hospital” (COMING SOON!) and this spin-off, “Slaughterhouse Z” which seems nefarious experiments splicing the DNA of Pigf**ker with a brutal breed or porcine to create Porker X… and soon after unleashed a horde of zombie-pig-mutants on the Welsh countryside.

We hope you’ll enjoy this chaotic comic which is knee-deep in bloody carnage. We also hope you’ll enjoy the story of Roxy and Serenity as they struggle to survive, and make it to their big day…. to support the project, and see what amazing Slaughterhouse Swag we have on offer, including original art pages, check out the Rewards section below! 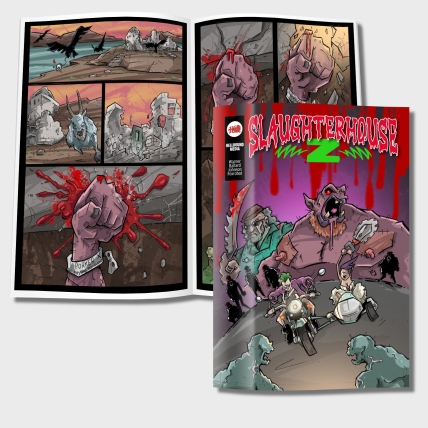 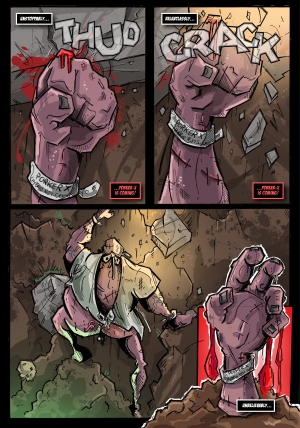