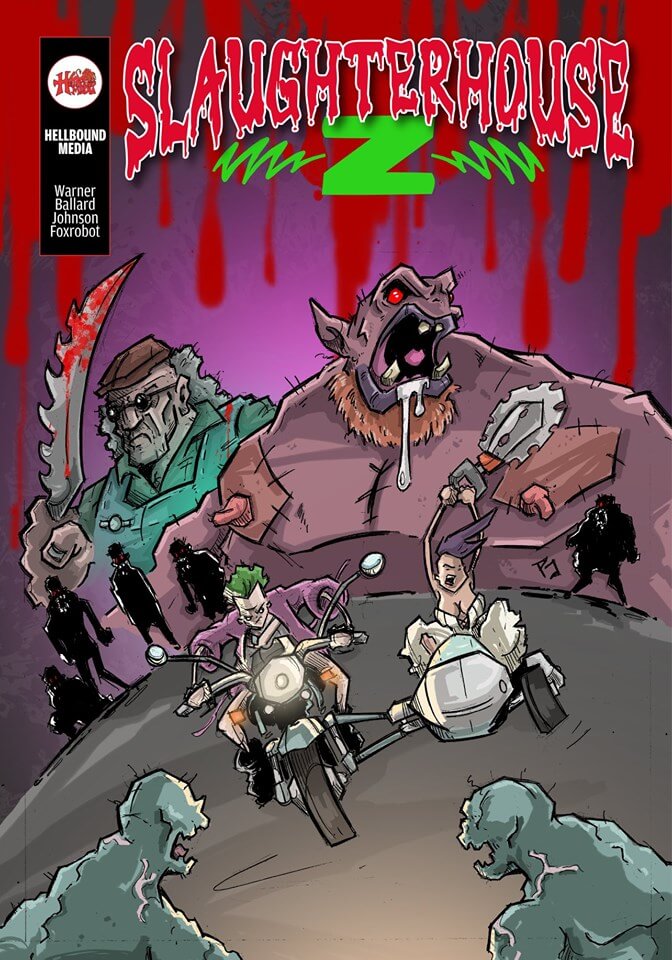 SLAUGHTERHOUSE Z by Hellbound Media UK is at 51% on Kickstarter Crowdfunding Platform with only 15 Days to go and needs more backers to become a reality. “Slaughterhouse Z Issue #1” is written by Matt Warner and A J Ballard (“Slaughterhouse Farm”), and features the stunning Artwork of Paul Johnson (“Razor Bastard”, “Death Truck”), with Lettering by Nikki Foxrobot (“Shock Value: Giallo”).

Official Synopsis of the Comic Book:- A secret genetic experiment has combined the DNA from a hulking serial killer, with a brutal breed of pig, to create a terrifying hybrid monster. “Porker X” quickly escapes from the secret lab where he was created and, alongside his prototype hybrids, wastes no time in carving a swathe of carnage throughout the Welsh countryside. It gets worse. The dead are rising, hungry for flesh, and Porker X leads this Army of the Porcine Dead in their unstoppable slaughter! Caught up in the terror are brides-to-be Roxy and Serenity, enjoying some private time together on the night before their big day. However, when Porker X turns his undead eye on their cabin, these two will have to fight for their lives. Can they survive or will it be a Wedding Day of the Dead?

A Spoiler-Free Review of the Project:-

Altering the DNA of a serial killer to create a humanoid pig monster called Porker X is a crazy and interesting horror plot itself. Almost like a modern day Frankenstein. To make the things worse, the monster has escaped from the facility and created an army of other experiment prototypes and undead to start killing everyone they see because their leader, Porker X is a serial killer pig. Sounds like only Dexter can stop him but since he’s not around, we see our leading couple- Roxy and Srenity, who get their perfect wedding day ruined by this emergency situation. The entire plot revolves around them surviving and defeating the undead army and their leader monster, Porker X..

The plot is interesting but ‘save the day by killing all monsters’ might feel too simple for some, but it’s exactly what keeps this comic focused on action and characters. What keeps the reader interested is the interaction, dialogues and action sequences of the characters. Whether it be the Porker X escape, or Roxy and Srenity’s dialogues, everything seems to be well drawn and feels nothing short of an action horror movie or a video game’s cut-scene.

The art style is perfect for this comic genre. The characters, colors and the environment has an eerie tone to them that’s consistent throughout the pages. The comic doesn’t have psychological horror element or ghosts but the horror here, is the similar action horror we see in movies featuring zombies, killers or monsters. There is violence, full cartoon nudity and suggestive content without any censorship, so, it’s only for mature audience aged 18+ who are comfortable in shock horror and nudity, which is artistic like in movies but often, disgusting as the Porker X monster is not wearing any pants (That alone is a factor adding to the horror of this comic!). The comic does a good job of delivering the shock horror demanded by the target audience of the genre.

Overall, If you are interested in a comic book which is more like an action horror monster movie full of chaos with some graphic uncensored content, I think you will enjoy this comic book a lot.

Please Back the Project on Kickstarter & Enjoy various rewards listed there (Only 15 Days Left)!

Learn More By Clicking the Button Below:-

Our Previous article about this Comic:-

Overall, the third issue lives up to the hype of the brand. There’s the right amount of humor, horror, love, and gore in this one to make any horror comic fan happy. Read the full spoiler free review over at http://ehpodcasts.com. And make sure you consider backing @kymerapress current @kickstarter campaign. #maryshelley #horror #frankenstein #kymerapress #ehpodcasts #reviews #crowdfunds #support #supportindie #womeninhorror #womencandoit #wihm11 #womeninhorrormonth
A damn good read. You’ll fall in love by page four. Plot; When the moon-bound crew of Gaia stumbles across an enormous alien vessel, more technologically advanced than their own, priorities change. The mystery deepens when the crew discovers the name of the vessel along the hull… written in English: VAULT. Read my full review of John Carpenters Tales of Science Fiction: Vault over at http://ehpodcasts.com Learn why it's a great read for being the first story of the at the time new created series. @promotehorror @stormkingcomics #horror #comics #tradebacks #paperbacks #johncarpenter #talesofsciencefiction #vault #sandykingcarpenter #reviews #ehpodcasts #everythinghorror