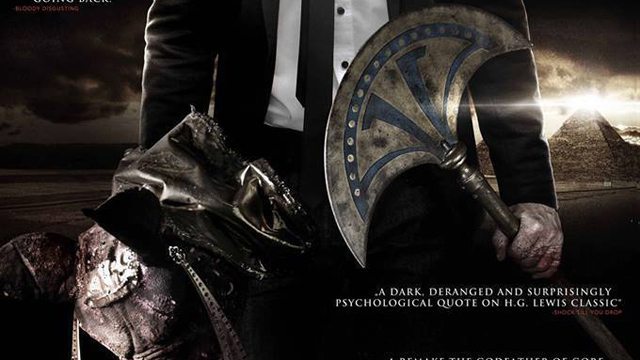 It’s not often you’d expect a remake or reboot to be as good as the original. Nor do you expect the hype centered around a remake to live up to it’s potential. Yet, Marcel Walz holds no punches in his modern-day adaptation of the iconic masterpiece of Herschell Gordon Lewis.

When the announcement for the Blood Feast remake first made headlines, I was instantly intrigued. The promotional art and the teaser trailer grabbed my attention. At that point, I hadn’t seen the 1963 movie, and I didn’t know it existed. So, I immediately researched it, found the movie, and watched it. For this time in Horror cinema, this film was way ahead of its time. The violence and gore shocked me, as I thought much of it would have been censored or cut out. I was amazed to see it all in its pure nature. What’s more, the special effects weren’t so bad that the gore looked like ground beef with spaghetti sauce; it was perfect for this decade. Bravo to Lewis for not holding back for all of us hardcore gore fans.

When the 2016 remake finally released, it was only a limited theatrical release, and there was never any word if it would release on streaming platforms. Yet, given the nature of this film, I knew better than to expect it on any mainstream platform, such as Netflix or Hulu. And, even if it did, it’d more than likely be highly censored. I searched for a while for this film and could never find it. I then put it in the back of my mind, accepting the fact that I may never see this film. It happened to cross my mind again, and I gave one last streaming outlet a shot, and to my surprise, it was on there.

Walz pays homage to Lewis’ gore fest the way it should have been paid.  Funny thing is, a lot of filmmakers and directors assume to pay homage to a certain film, director, or decade, but it is rare. The special effects are amazing. It’s like Lewis’ film “on steroids”, as the saying goes to describe the experience. The cast is phenomenal. Robert Rusler‘s portrayal of Fuad Ramses deserves an award. Yet, this modern-day adaptation takes a more calm nature than the 1963 film, where the acting is more over the top dramatics that you’d certainly see in a 60s production.

The practical effects were icing on the cake. I’ve always thought masks were creepy ever since George Mihalka‘s My Bloody Valentine (1981). When Fuad (Rusler) dons the modern-day ancient wardrobe, it captured an even darker tone. Definitely give this film a watch.