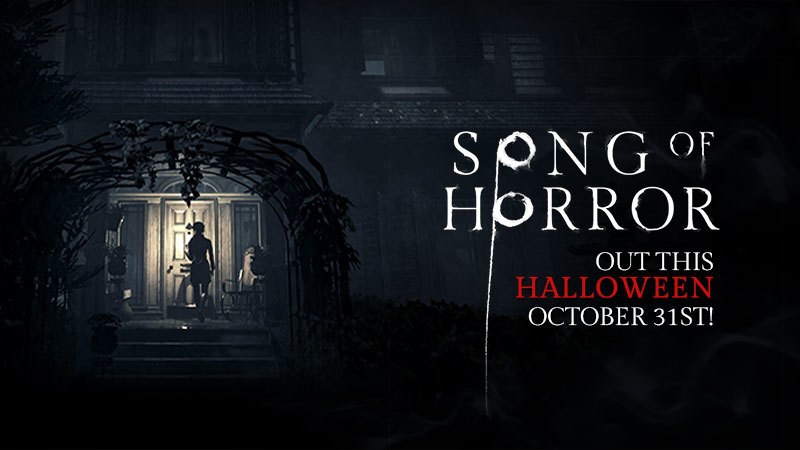 Learn More at Steam & Add to Your Wishlist

Here is the latest update regarding the new release for Song of Horror from Protocol Games. Originally the idea was to release it this month (September), however it looks like Protocol Games have changed their minds.

We are truly excited about the horror adventure we are working on. As the release date gets closer and closer, we are able to share new content about a game that we hope will blow your minds. We are pretty confident that the blend between mystery, adventure and the horror of The Presence will drag you down… for months. That’s why we are super happy to reveal that Song of Horror will be released in five episodes, starting from October!

Song of Horror launches this Halloween, October 31st on an episodic format. The first two episodes will be out on Halloween, and each one of them will offer a unique, scary experience set in a different location and seen through the eyes of 13 different characters with permadeath. You can wishlist theComplete Nightmare Season Pass now on Steam!

Every episode will offer new, unpredictable spooky situations that will scare players. The first episode will be located at the scary Husher mansion. But for the second one, we will travel to a haunted building with a particularly horrifying antique shop. Do you fondly remember your school days? That’s about to change when the third episode brings you to a cursed college building. An abandoned abbey, surrounded by a deadly halo after a creepy concert, is the location of the fourth episode but the one that really gets me is that mental institution where you will face the ultimate challenge.

Song of Horror is a psychological horror adventure where you have to investigate a series of mysterious disappearances. It’s not a classic horror game set in a cursed house but a story told in unique, different locations where you will have to control up to 13 characters to investigate, solve riddles and face The Presence, the relentless AI prepared to become your worst nightmare.

We are so excited to be able to finally start sharing with you everything about this beautiful, scary game of ours! We hope you are able to get a taste of what you will be facing in Song of Horror with our latest trailer and images. Don’t try to get ready to face The Presence because it will be it, and not you, who adapts to your gameplay to hunt you down the moment you least expect it to happen.

Have a nice week… and beware of The Presence!

Here is the Interview with Carlos Grupeli of Protocol Games.

Hopefully Carlos would like to come back on and speak with us, whether it’s before or on first release of the game. Till then make sure you keep up to date with everything on Protocol Games.