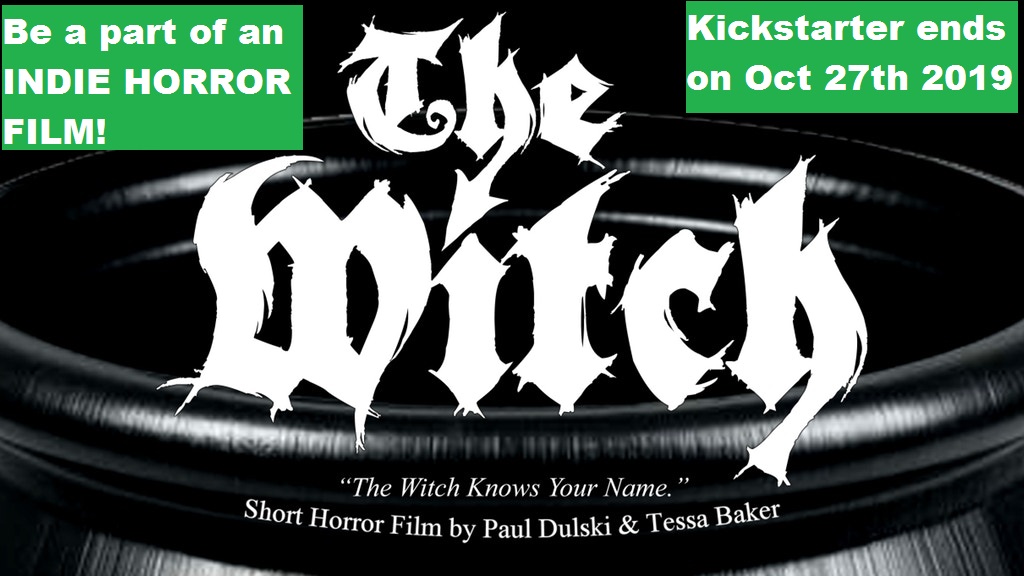 Do you like horror films? Then this is a chance to get an IMDb and end credit name in a horror short film, be a part of the cast and crew as well through Kickstarter rewards! Paul Dulski & Tessa Baker from Vermont USA, founders of Everything Horror Podcast Press brand since 2017 and Haunted Vermont Brand since 2012, have successfully funded and released their indie horror film, “The Passenger”on 13th October 2019 on YouTube.

From the people behind THE PASSENGER: A VERMONT URBAN LEGEND comes their next Horror Short. The Witch. “The Witch Knows Your Name”.

Being filmed with practical effects. NO CGI at all, and wanting to create a nice little tale about how sometimes, it’s best not to upset a Witch. Because it could lead to yours and others demise.

Support the “The Witch” horror film on Kickstarter to get IMDb credit and movie digital copy, T-Shirt and more info on Kickstarter (Ends on Oct 27th 2019, rewards from US$1, $800 goal, You can watch the first full film “The Passenger” on the Kickstarter page)

Below are some of the important details about the campaign:

Thank you for the love and support you all have provided us so far. We are truly grateful and that’s why we felt that you all should get the opportunity to be more than just the fans! Be a part of our next horror film project “The Witch” as a translator, actor/actress or by simply having your photo inserted in the film!!

Within 2 days, we received $356 out of $800 Goal for The Witch Kickstarter campaign that ends on 27th October 2019 9:28 AM UTC +05:30. We thank the returning backers and would like to provide some new exciting news about the campaign!

A short video providing information about the Kickstarter campaign:

Here is a push of trying to get some backers, to hopefully reach the goal. We’ve added a few different perks, one is also in association with the upcoming short. More on that below. Even if current backers want to upgrade, now is your time!

Shirts are available for add-on’s. Physical backers already can add any other shirts for $25, for non physical backers that would like a shirt. Please remember to also add shipping.

ROW: $40 (Some countries were lower, but I cannot guarantee a low price)

If you have seen THE PASSENGER, please feel free to leave a review for it on the IMDb page.

The Witch campaign Perks that allows you to be in the film, DVD cover reveal, new T-shirts & add-ons!

Once funded, we will be ordering 50 Copies of these “HAUNTED TALES” where it will include The Passenger: A Vermont Urban Legend & The Witch. Plus get extras. Includes Interviews with cast and crew, bloopers, directors commentary and a little more.

Detailed Description of the perk:

We must reach a goal of 50. Whomever gets this will be funded back. However DVD will include both The Witch & The Passenger movies, plus extra content. Plus offers everything in THE WITCHES GOODIES PERK. (END CREDIT | IMDB, DIGITAL POSTER, THE WITCH DIGITAL MOVIE)

# The existing Witch film backers can get these ADD-ON perks:

# New SHIRTS besides the classics:

# Be a translator, spread the horror in your language and be a part of the crew!!

Become a Translator of The Witch. Plus some other treats. No tricks.

# Get your photograph in the film!

Be remembered in a subtle way & also be a producer….

THE WITCH ULTIMATE PERK. Become part of the Witches Den by having your photo in the film as a victim.

# Be a part of the cast & see yourself in a scene!

Record YOUR own death scene, and send it to us. Depending on how you die, you can create your own unique death scene. A video release form will be needed SIGNED. For $200, not only will you get FREE SHIPPING and have your PHOTO in the film. YOU could actually film your own death scene for The Witch. It will require a SIGNED release form which will be sent to you via email upon end of campaign. Limited to 10. This is your chance to become not only the ultimate WITCH Fan but also be a member of the cast! Don’t miss this opportunity!

Detailed description of the Perk:-

This is limited, be able to record your own DEATH scene to have in The Witch. Depending on how you’d die, you can record and send us YOUR RECORDED FOOTAGE. A video release form will be needed SIGNED upon using the footage.

What’s better way to celebrate this Halloween than being a part of a horror film?

Please check out the Witch Kickstarter page to become a part of this amazing film making process today because the time is running out, as the campaign ends on 27th October 2019 9:28 AM UTC +05:30:

We also request you to at least share this campaign with as many people as you can so that more people get to know about the opportunities that we are offering for horror and film enthusiasts!!

Click here to visit the Kickstarter Page of The Witch horror film!

Thanks and as always #StayScary

BACK THE WITCH TODAY!

Do you appreciate Indie Horror films? If yes, please support our 2021 indie horror film, The Witch before our Kickstarter campaign ends on Oct 27th 2019!! Click here to support The Witch