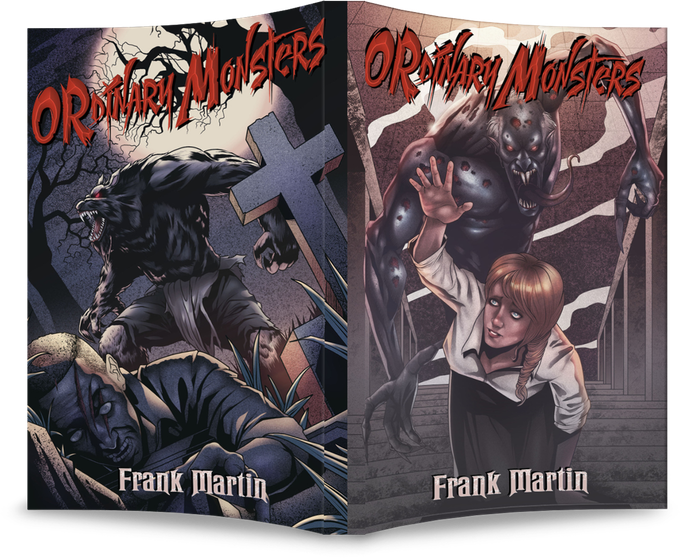 Without spoiling, we review Frank Martin’s “Ordinary Monsters” book containing 2 separate novellas in 1 double-sided book of werewolves and vampires. Plus 2 short stories & 2 short comics included as a bonus! It was successfully crowd funded via Kickstarter in August 2019 and now is available for public for purchase!

What happens when an overbearing family drives a teenage girl into the arms of a mysterious, pale stranger? How can a high school junior explain having strange dreams of a Nazi concentration camp after being bitten by his neighbor’s monstrous dog? And who will win when two iconic creatures of the night clash on a desolate WWI battlefield? Dive into a world of werewolves and vampires with ORDINARY MONSTERS, two standalone stories featured in a double-sided novella from author Frank Martin. And if that weren’t enough, they’re both followed up with a short prequel spin-off focused on a character from each story. Plus, don’t forget to check out the bonus comic shorts found in both ends of this jam-packed book of pulp and terror.

Inside ORDINARY MONSTERS you can find:

As the cover of the 150 pages horror book suggests, the book is about monsters and the word “ordinary” in the title as well as the foreword by BWP publisher Edd Sowder, tells us that author Frank Martin’s book explores the monsters and horrors of ordinary lives of humans like you and me. Inclusion of paranormal elements into these ordinary stories was very smooth and brilliant character development helps the reader to connect with every character, and even monsters from these stories.

Like the cover art, the book contains 2 main stories which are further divided into small chapters that show a day or a situation. It also contains some pages of comic that relates to the main theme of the second main story. The book not only tells about the stories of the protagonists but also tells us the story of origins of the monsters or the antagonists through spin-off stories included after the main stories end. There’s humor, horror, romance, real life history, heroism, and moral lessons packed in these stories.

The first story is about the importance of family values, dreams and then turns into a story about love & meaning of love with some dark twist and turns that nobody can predict. The story of two sisters- Laura and Jessica is told in a brilliant parallel narration. It starts off as an ordinary yet interesting story about girls struggling with their life but ends up being a very dark and twisted tale. Gabe’s character is also pretty sophisticated with a lot of mystery surrounding it which is revealed in the backstory after the main story ends.

The second story is a bit lighter in tone, and concentrates on friendship between two boys Eric & Liam, both having an appetite for getting into fights with some racist kids from the school & partying on weekends. There’s a theme of World War II and Holocaust, which might feel a bit odd at first but as the narration and story continues, the true reason is gradually revealed. The method of story-telling is fantastic. It starts off as a humorous story about school life then slowly becomes a thriller and there are shades of history novel and of course, near the end, it becomes a full monster horror novel with every detail of blood and gore expressed without hesitation.

Overall, the 150 paged horror book with 2 main stories, 2 mini comics and 2 epilogue-like stories was a lot of unexpected quality horror content that never failed to surprise and thrill me. With every page full of beautiful narration, stories full of like-able characters, well-crafted comic pages as an added bonus and enough monster-filled horror to satisfy horror fans, Ordinary Monsters is an extra-ordinarily entertaining and shocking horror book that must be in any horror fan’s collection.

And now some pages from the two short comics included inside:

Frank is a comic writer and author that is not as crazy as his work makes him out to be…seriously. Since his writing career began he’s had multiple short stories published in horror anthologies by both Burning Willow Press and Stitched Smile Publications. Frank has also had comic shorts appear in the “fluff noir” anthology series Torsobear and the all-ages horror anthology Cthulhu is Hard to Spell. Frank also wrote and produced the comic anthology series Modern Testament, which featured a wide ensemble of artists throughout its four volumes. Frank’s novels include the YA sci-fi thrillers Predestiny and A Weapon’s Journey, both published by Crossroads Press, and the zombie horror Mountain Sickness published by Severed Press.