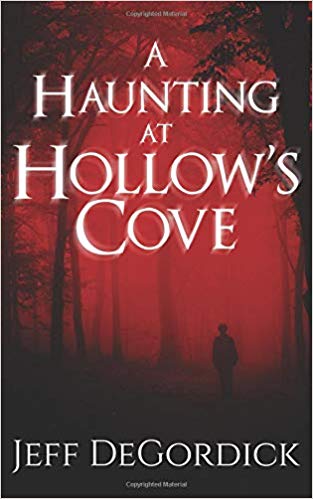 Without spoiling, we review a Horror Novel by Jeff DeGordick called “A Haunting at Hollows Cove” which is a 282 paged book filled with thrills, horror, friendship and lovable characters.

Mark Winters comes home from work to find his worst nightmare: his family, murdered. The only clue at the crime scene is a mysterious brochure for an old, run-down fishing lodge. When he arrives, Mark finds that there’s something strange about the locals and even stranger about the lodge. It sits on the edge of a lake, overlooking an ominous island on the water that the locals warn him to stay away from. But Mark starts to see the ghost of his son, who wants him to go to that island and discover secrets long-forgotten. But as Mark digs into the past and tries to solve the puzzle, forces far more powerful and evil than he can imagine conspire to use him for their ends. Because somebody wanted him to come. They’ve been waiting for him, and Mark soon finds out that some secrets are better left buried.

It starts off as a normal story of a man named Mark Winters returning from his work but finds nobody in their usual rooms. Upon searching further, he finds his wife and two kids murdered with no trace of anyone intruding the house. He sees a ghost there and a brochure of a place he had never visited yet it seemed so familiar… It has a message on it that compels him to visit the place for possible connection with the murders and clues of the culprit.

The Hollows Cove has a dark mystery island that’s off limit to even the locals. There’s a shrouded mystery surrounding the island as it has a scary past. The trees grow differently on it, the soil is more like ash and sunlight can’t pierce through the trees. Animals and humans behave differently when they place their feet on the island due to the dark energy and evil influence of the island.

Our protagonist tries to figure out the connection of the murders and the mysterious place from where the brochure has arrived. In his mission he meets various interesting characters, all of which have important roles in the story till the very end. He reaches the lodge featured on the brochure and that’s when the story begins to get scarier. Felix the lodge owner is the most memorable character and has a lot of impact on the reader and Mark as well. The dialogues, situations, and storytelling style of the author makes him a lovable character. Then there are other lodge customers like Jerry, Pete, and Hector. Each character adds important insight into the story of the place and unique interaction with Mark that helps to keep the things interesting. Some scenarios at the lodge at the beginning help us to know more about the lodge, and personality of characters better.

Horror starts from initial pages as the story begins with a murder scene and the horror continues till the very end as there are many creepy twists and dark revelations throughout the story. Mark learns about dark secrets of the place that make his search more difficult & frightening. The biggest thriller factor being the story of 3 brothers who are accused of being serial killers in the past but never got the crimes proven. They are living in the town for several decades and not mixing with the locals at all. Mark’s initial investigation leads to nothing but gradually there are several twists and shocking findings that are effective due to the unpredictable nature of them. Mark also has several nightmares and flashbacks that are described in a scary way. Not only the violence, gore, and normal details of places are explained well but also the emotions & expressions of the characters, making it a true novel-like experience.

Overall, the 282 paged horror novel is full of content that will entertain you and satisfy your horror cravings. It also tells a tale of love, friendship, morality, and bravery. If you are looking for an intelligently written horror novel that not only delivers the thrills but also acts like a beautiful story with characters full of depth, Jeff DeGordick’s A Haunting at Hollows Cove deserves a place in your horror novel collection.

Take a look at Amazon.com Page of the Book (Preview, eBook/Kindle, & Paperback available)

Get the Jeff DeGordick starter pack – get 3 FREE books: https://jeffdegordick.lpages.co/jeff-degordick-starter-pack/

Subscribe to the newsletter to know about the latest book releases: