On may 5th 2064 London fell victim to one of the largest terrorist attacks ever committed. Britain’s borders have been closed for over 20 years in an attempt to reduce terrorism. Resources are running low due to lack of imports. In an already overpopulated country actions by an authoritarian led state must be taken against the poorest.

The first volume centres around Ryan Murphy. A man of the state he follows and obeys orders daily just like everybody else. But his world is about to be turned on its head as he discovers a conspiracy that will change everything he has ever believed.

This is the world we are all afraid of, but unfortunately has it already started to show? The team at Afterlight Comics third comic crushes the atmosphere of London, UK in the future. Workers become robots, no one cares for a person’s life. People are mistreated on the streets and hell, what is actually a “safe haven”.

It’s watching a country become in a panic, state of emergency. It is unfortunately happening now, but at what costs? Resources will become slow, rationing will possibly be the new beginning of this world we live in now. 2084: The New Order Vol. 1 could be showing us the future that has come to be, may not involve terrorists, unless you count what is actually going on. 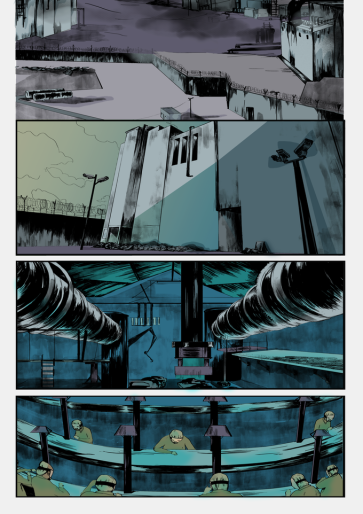 Could this comic be so right about the future that is one reason why Afterlight Comics doesn’t even have it up anymore via their website? Is it because of the actual world as we live in today just the reason? One thing is for sure, if you can find this and read it. It’s quite interesting and pretty spot on with some of today’s circumstances.

Maybe when we can get past today, tomorrow, and years to come? We could re-look at this particular story. There was plans for a 2084: The New Order Vol. 2, however that never saw the light of day.

Overall, for Afterlight Comics third title for their at the time catalog, its a big step of telling a serious matter. Present or future story, doesn’t matter, it’s one thing I believe we all think about. The day the world panics and goes down the tubes. Controlled by the government, it’s literally our worst nightmares to come.