Fresh from the pages of Scout Presents: Midnight Sky Free Comic Book Day, Midnight Sky is Invasion of the Body Snatchers meets They Live. What would you do if you discovered your son wasn’t really your son? He may look like him, act like him, but deep down in your soul you just know… he’s been replaced. Then your worst fears are realized when the light hits his face just right and you accidentally see his true appearance for yourself. But he isn’t the only one you discover… your neighbor, your friend, even your husband. Do you scream? Do you run? Or do you fight back? And how can it be that your daughter is the best and, perhaps, last hope for mankind?

We open up to a little prologue of the days before this never ending change between the world of Midnight Sky. I already found one person from this story I don’t like, and I hope he doesn’t show up (which he might) for what he did to a dog. If anything hopefully the ladies husband got what he deserved, especially if he was having affairs with other people.

Thirteen years later, the newborn Elita, grown up a bit and is now living in a world we all would hate to be in. It’s almost getting to the point of just looking out your window in todays reality. How much longer till we have to defend ourselves off from everyone else? Minus these “Monsters” that appear in this comics universe. It’s just only a matter of time. 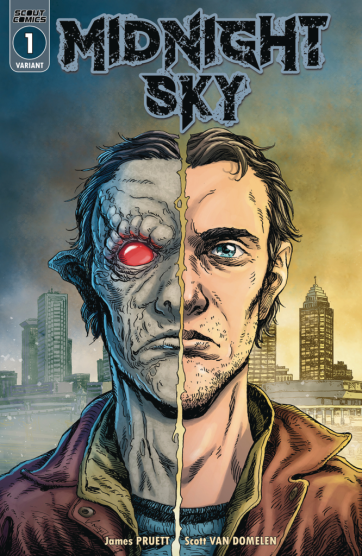 I’m glad for sure that the lady who was with this abusive, not caring father is no longer with him. Which makes me wonder if any other issues show us more to unraveling what has happened between those two. Did she confront him? Did he meet his demise by lechers looking for “their kind”. Time will tell, and I’ve come to the conclusion that dogs are like apocalypse type best friends in comics. You don’t ever really see anything about cats, but I know cats won’t defend their owners (well some can).

And as we draw near the end of the first Midnight Sky, another dog has joined. The family group is no longer safe, and whelp. Maybe trying to keep secrets from others could cost other peoples lives. No matter what, it’s family first and others second. However honestly is a big key and role when it comes to survival.

As we look at the colors, art and story. Like I mentioned in my previous post, the artwork from the Free Comic Book Day cover really caught my eye. It was then my first introduction into the world of Scout Comics very unique title collections. The illustrations Scott use mixed with the colors by Ilaria have a right tune of soothing into a perfect sunny day, to down right feel of coldness with a dirty atmosphere of lost hope. James the writer and creator of Midnight Sky seems to have nodds to other type of stories we’ve seen, but told with his own visions. Midnight Sky I feel is the next top thing for sci-fi stories and comics.