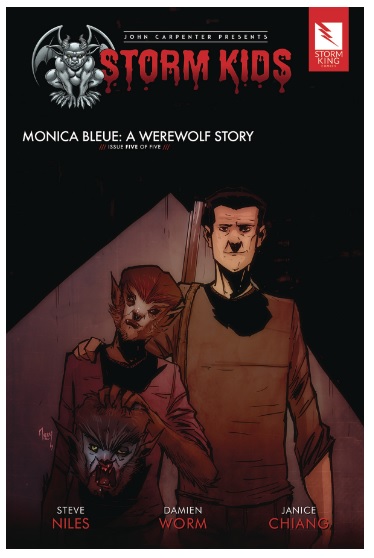 Released on April 8th, 2020. A werewolf themed Storm King brand horror comic presented by John Carpenter and follows the tale of a teenage Monica whose life changes after she confronts a werewolf in the woods. She and her father is now on a mission to chase down and stop the werewolf. They face the werewolf in the city and then return home in Issue 4 but find themselves in a big trouble as things gets dangerous in the Issue 5.

Monica must use her own vicious powers to fight the werewolf before it kills her father. Yet the beast holds even more secrets that may cause an all out war.

Official trailer for the series:

Monica Bleue, a horror comic about a girl called Monica and her father discovering that a wild werewolf is in the small town where they had planned to start a quiet new life. Initially having trouble getting along, now, Monica and her father are like a team that worked together and faced the werewolf suspect in the city nearby. Returning home, Monica wakes up after a loud noise from the house. The bedroom door opens and she sees the giant werewolf holding her father as a hostage! This is where the Issue #5 starts.

As mentioned above, this fifth and final issue starts off with action, and I must say that the action continues till the end. With fully colored 33 pages, not a single page is wasted to be a filler, and with every page, there’s some important thing happening, whether it be the fight taking a different turn, or some important detail revealed through the aftermath of the fights. It’s full of werewolf fights, survival horror and with Monica’s dad being there, it gets the usual man vs. the beast action too. I like how the comic also adds some important story elements revealed in Issue #4 and makes it a big twist in this one that results in a super exciting finale.

There’s nothing much to nitpick here as there’s a lot of content here, and we do get a satisfying ending that is a closure to the werewolf rampage going on in the town since Issue #1. I just wish that there was another issue to dig deeper into the story of the antagonist werewolf. Also, maybe the aftermath of what happened in this issue. Maybe there will be a new follow-up series or a spin-off after this? There’s always a possibility but it’s not hinted yet. We do get an exclusive free sneak peak at a few pages of an upcoming sci-fi horror coming from Storm Kids that remind me of Marvel’s Guardians of the Galaxy with similar focus on humor, space, and unique characters but with the signature Storm Kids illustrations and narrative style that makes it stand out.

This comic issue has the same amount of detailed illustrations, effective and well placed dialogues, werewolf horror, and character development as the other issues. Issue #4 was light on gore, but this final issue gets the essential gore and violence as it features werewolf fights. There are no swear words, no nudity, and no suggestive scenes. Thus, making it a great read for most people who can handle some gore, and werewolf action.

Overall, the Issue #5 of Monica Bleue delivers what we expect, and also gives some unexpected satisfying twists. It is full of werewolf action, essential gore, and an essential closure to the werewolf horror story that has been building up since the first issue. If you are a horror fan, you will love this issue, and while it works well as a standalone werewolf horror comic featuring some exciting fights, it would be more satisfying if you check out the entire Monica Bleue comic series and experience an unforgettable unique story of how a father and daughter who weren’t getting along became an awesome team and saved their town from a werewolf that tormented the animals and people for years.  A must have in any horror fan’s comic collection!

Info and purchase links (The comic will appear on the official pages from the release date- April 8th, 2020) :

Our Next Film “TERROR TRAIL” NOW ON Kickstarter