The October Faction’s first 3 books published in one new volume! Meet the Allan family: Retired monster hunter Fredrick, his wife Deloris, and their two children Geoff and Vivian in this tale about the typical challenges that a very atypical family encounters while fending off the attacks of vampires, werewolves, demons, and more. Paperback, 288 pages.

Let’s get to know the Allan family shall we? Mr. Allan was once a Monster Hunter that partnered with Uncle Lucas. However was disbanded when they had a huge settlement and went off to start normal lives, except one person. Mr. Allan started a family which could give us a vibe of “The Addams Family”, the housing, family itself and well the maid. Upon reading you’ll get the hint that both children want to follow in their father’s steps, that would require them to learn the art of the hunt.

Geoff has been practicing the symbols to trap souls, which at the start seemed to have trapped an angry lady who may know Fredrick Allan personally, all because she didn’t hurt the children until their father came into the picture. Sound familiar? It’s like “Supernatural”, only the whole family can sense the dead around everyone else. Later on we learn that Deloris (Fredrick wife), met up with someone who slipped her a key which unlocked Mr. Allan’s storage unit. Locked inside, Fredrick hid away a boy, but not just any boy. He was part of a kidnapping by his “father” who helped fix children in need, however he got the urge of vengeance when Fredrick came in and took out the father right in front of him. Not realizing what the truth was behind the helpfulness of this “father”.

No matter what, Mr. Allan kept bringing in enemies of the past. The strategy for each one to possibly get closer to Fredrick, his own children and wife. Deloris was beaten sometime between freeing the boy in the unit to winding up in the hospital shortly after, when it was revealed that The Boy wasn’t responsible for Mrs. Allan, they all set out to figure out who it could have been. A man, Cope. Walks into their mansion and confirms he was the reasoning behind Deloris injuries, Mr. Allan was threatened by Cope of destroying their lives, and without hesitation, Fredrick puts a bullet through Mr. Cope. From here on, Geoff and Vivian started learning how the family business works. 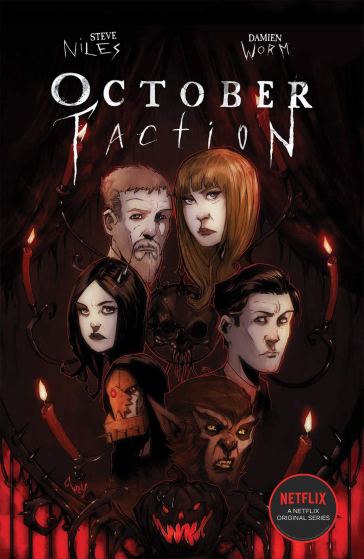 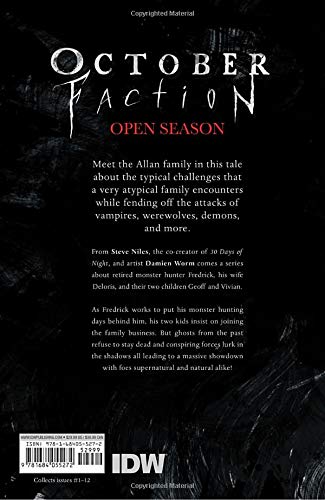 Throughout the remaining pages, we witness the burden between the family. We watch enemies try and take everyone out, we watch as the family trains to become better prepared to hunt monsters. Trust is a big issue, can the children overcome what is written down on paper? Can an alliance be made to take back their lives, rather than seeing it crumble before them. Every page of action draws us further into the world of October Faction, watching and reading every twist and turns along the way.

On January 23rd, Netflix premiered the entire first season of a live action October Faction. Consisting of a total of 10 Episodes.

Overall, Steve Niles and Damien Worm have created a hauntingly beautiful world. Damien doesn’t disappoint with his dark and gloomy pieces of art, it’ll bring you back to 30 Days of Night where it all began (well at least for me) where we really saw his work take a bite. Steve’s writing is more immersive I feel, and with it comes a dark twisted tale of a family of hunters, trying to not get hunted down themselves. You can also purchase this volume from Steve Niles official website. Amazon, Comixology, IDW Publishing and don’t forget to support your local comic shops by ordering through them.

I hope we (meaning I) get to witness the other Volumes of October Faction get turned into a big book like this one did, this was TWO Volumes in one. So Volumes 3 & 4 would be nice together, one day I hope. Then I can start the next “Deadly Season”. But more I look, Volume 4 is the start of Deadly Season, so maybe Volume 3 is the finale before heading into “Season 2”. Either way check this haunting tale and art out for yourselves.