Intruders is a first-person stealth game for Virtual Reality. In it we take control of Ben, a 13 year old boy who sees his entire family being held in his own mansion by psychopaths. Luckily, at the beginning of the story the kidnappers won’t know we’re there, so we’ll have to try to free our parents and sister without being discovered and survive the worst night of our lives.

I recently played because of the current PlayStation Deal is $5.99 / $19.99 (ends April 29th 2020). And also became available Sept 26th 2019 on Steam. I was reading the description and was interested, but didn’t know how I felt about it till a year later. So here is my opinion, on Tessera Studios attempt of a Home Invasion First Person Horror Game. We actually watched some game play before deciding on purchasing it (thanks YouTube).

Let’s start off with the graphics and sounds, as the opening of the game starts we get hit with these nice warm colors of a early morning, as our “parents” drive down the road talking about a week off vacation at our summer home. During the drive, it seems the father almost lets out too much information. Which quickly escalates as our mother shuts his mouth, and changes the subject before learning whatever dad was mentioning.

Sounds of the air as you can control your side of the window to roll down, and before our nice ride ends, we can watch some kind of ad on our car TV (right behind the parents car seats) with fold out car trays for when us “kids” need to eat. 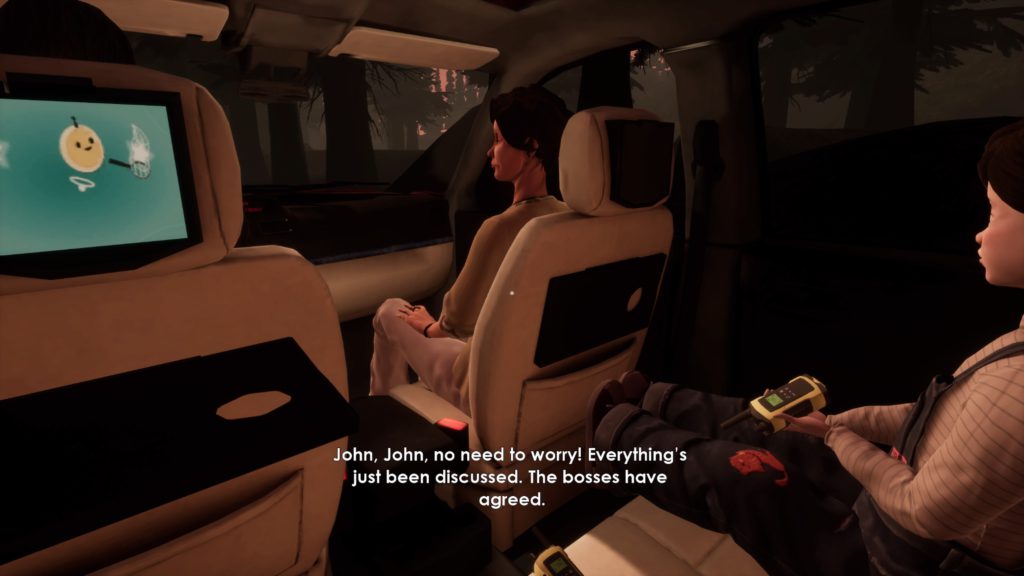 As we get into Controls of the game, we get these tutorials to pop up even after we’ve completed the game with no way to turn them off. We have to re-do them over and over, unless you use the Select Episode options. It takes you through Flashlight (which isn’t the best one I’ve seen in a game), Movements, and then. How to calm your nerves or fail to calm down when hiding. Which I’ll complain a little bit about the hiding, yes it tells us where we can hide and what not, but when it comes down to actually running away you’re too slow (you do play a 13 yr old boy). But when you were learning everything, stuff was highlighting up.

As the game progresses through the story, we meet the three intruders that come into the house. Prepared to have nothing come in or out of the place until they receive what they have come for, which at the time you don’t have to much of a clue except there’s a panic room.

Unfortunately this is where I give the game a little minus off the fact that as you go into the dark of night. It can be quite dark, especially with… well I called it a “dying flashlight” that dims not so bright, but it’s smart at the same time since these intruders have their own flashlights so you don’t want to sacrifice your position to them. But if you combine your slow speed, shitty flashlight, dark atmosphere (if you don’t touch your brightness settings at start of menu). You won’t be able to see anything and sometimes the interaction buttons aren’t showing up. Which then leads to restarting the current chapter all because you were caught.

So as I wrap up this little review of Intruders: Hide and Seek (Non PSVR Version), I will say that the environment sounds are great in areas, and then there are times when I could not figure out if they left the rooms or were walking about. The story as a whole was indeed my favorite thing about the game, especially how these Intruders connect to your family. The brightness setting isn’t accessible in the game pause menu, unless you quit to main menu and adjust the brightness there which basically forces you to restart whatever current chapter you were on. Controls were nice and smooth at times, until it came to hiding. Some clunky controls especially when the interaction buttons aren’t showing up until you focus on the object at the right angles. Beds are usable to hide under, but there’s no interaction button, you have to get far enough over of side of bed in under to duck under.

Nonetheless, if you’re looking for something short and fun to play. Running around as a 13 year old boy, trying to save your family from Intruders. Intruders: Hide and Seek is a game for you, if you can’t stand stuff or you’re still uncertain about it. Look up a game play videos, and learn from whomever if it fits you. I didn’t realize how dark it was nor did it occur to me from watching others that Brightness Settings wasn’t available once you’re in the game, without leaving to main menu. For $20, you get to play about an hour and a half, hour and a quarter. Or you can wait for it to go on sale. And on that note, there is multiple endings.