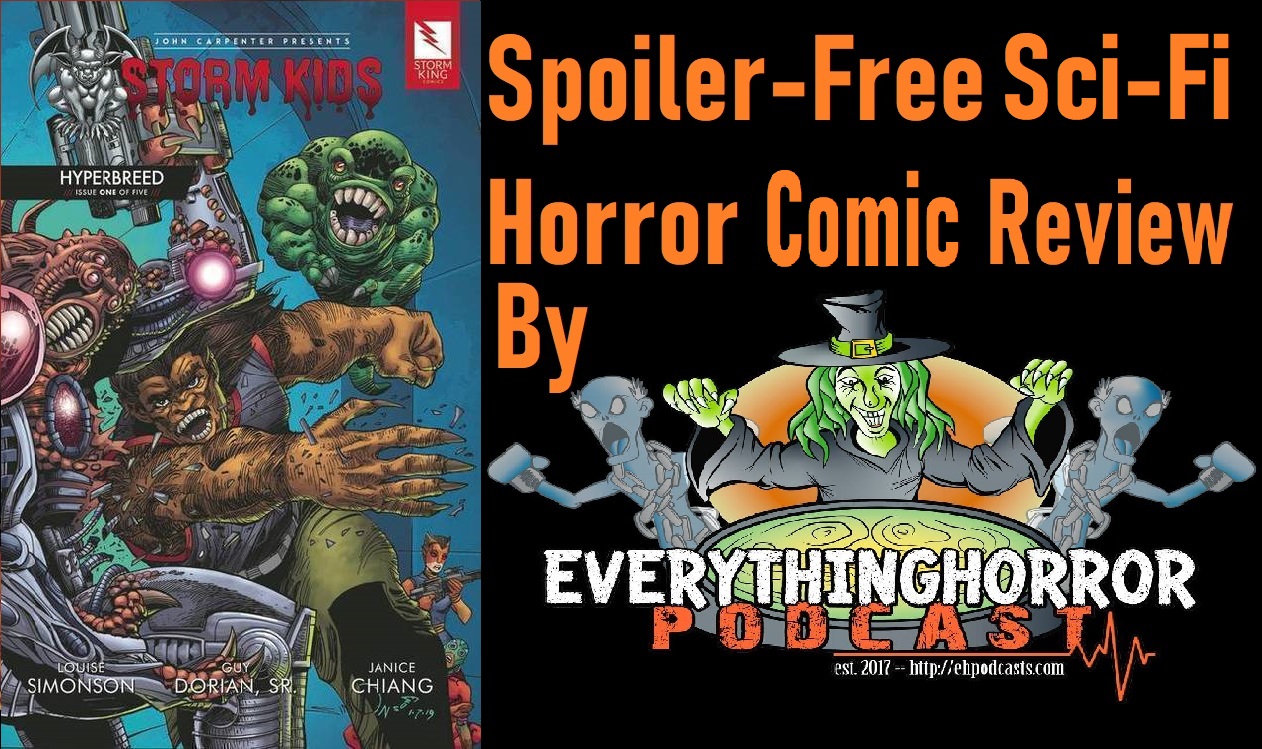 Without spoiling, we review, a sci-fi horror comic, John Carpenter Presents Storm Kids: Hyperbreed Issue 1 which provides sci-fi superhero action along with space and alien horror, in a new story that would be loved by teens and adults alike! Released on June 24th, 2020 in comic stores, and Storm King Comics website.

Info about the story:

In a future where ships can fold space and much of humanity has abandoned its depleted world, two forces— Government and Corporation— vie for control of what’s left of the Earth, of known space, and of the universe beyond.

Byrr, Fext and Cammo are three Hyperbreed assets who’ve run afoul of their Corporate masters. Thrown together on an ancient freighter, their mission is to transport valuable Explosive Ore to a distant mining colony. But their mission is far from what it seems and the battle for their futures and the future of Known Space is about to begin.

In the vastness of space, small betrayals can have major consequences, playing the odds can change the course of history, and Luck isn’t always what it seems.

Hyperbreed- as the name suggests is a comic centered on human animal hybrid species, who are the protagonists here. We have three of them, one guy (Byrr) that reminds me of Beast from X-Men, lizard guy (Cammo) like the Argonian reptilian race from The Elder Scrolls, and a Fox lady (Fext). The first issue focuses on them transporting valuable thing in a spaceship to but they get attacked by creepy space pirates…

As the comic starts, we see the protagonists playing a card game, and we see the mention of lady luck which is a nice theme that consistently stays throughout the comic, till the last page. The game is interrupted as the spaceship is surrounded by aliens that attack with a substance that can destroy the ship like a fungus, and there’s a threat of getting the aliens on the ship as they eye the valuable cargo aboard. The struggle, and fight for survival is the key feature of the first issue.

The sci-fi action is high, and it feels epic but at the same time, the horror element is also present as the virus spreads like a symbiotic substance and there’s a dreadful feeling of whether the protagonists survive the attack or are left to die in the space. When the actual aliens show up, their design is indeed very scary, and I am sure that the next issues will be having more of them. The character development is awesome as you can relate to the team despite their hybrid appearance, that’s because they’re given human touch with humor, feelings, and feeling of fear/panic instead of just being egoistic.

The comic is well illustrated, and the art is very different than that of other Storm Kids comic, as the space feels beautiful, ship battles are huge and character look creepy, and protagonists are likable. There’s some blood, and violence, but no nudity, suggestive themes or bad language. A great read for teen and adult sci-fi horror fans.

Overall, Hyperbreed comic has a lot of exciting and creepy content in its beautifully colored 32 pages. The story is exciting, protagonists are likable, aliens are scary, and space battles are truly magnificent. For any sci-fi and horror fan, this comic would be a great source of entertainment that also feels like a hybrid of superhero action combined with space horror, just like the hybrid status of the protagonists.

Get autographed copy of Issue 1

Review of other issues: