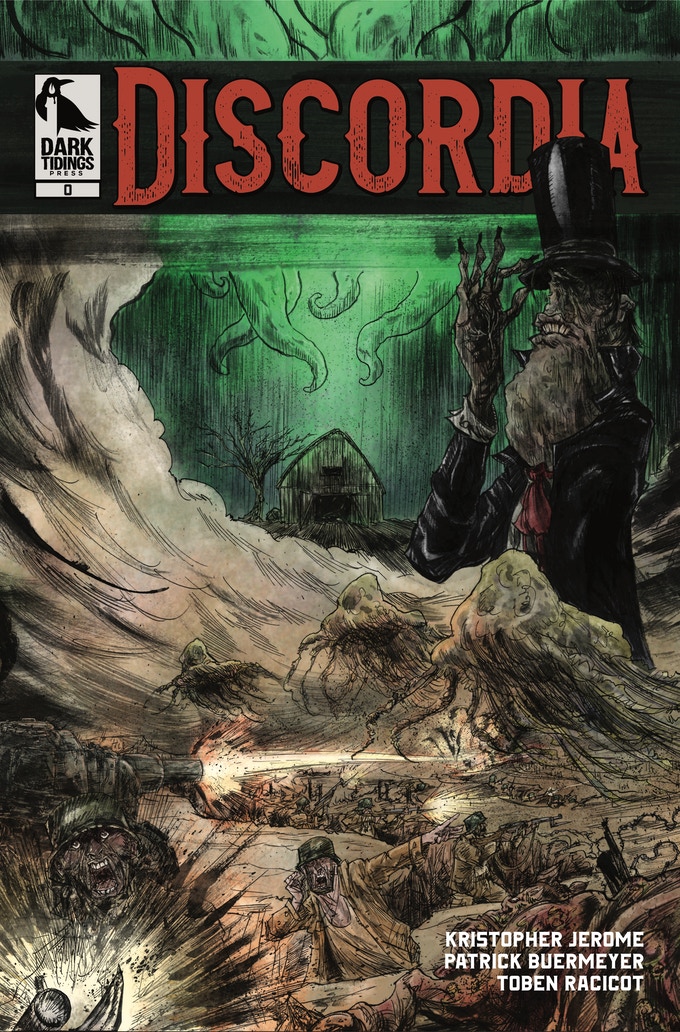 The introductory issue to an ongoing horror series. This #0 world-builds for the epic horror tale to come.

Created by Kristopher Jerome and Patrick Buermeyer. Published by Dark Tidings Press, LLC, An indie publisher of speculative fiction based out of Albany, Oregon. Dark Tidings Press focuses on Fantasy, Sci-Fi, and Horror, both in prose and comics!

The first Issue is free to read on Webtoon (Link given below, and on the Kickstarter page), but the Kickstarter crowd funding campaign provides the backers with the ability to get physical rewards, and of course to support the creators.

Much more information is available at the official Kickstarter page which is available till September 2nd, 2020 10:17 PM UTC +04:00. A glimpse of which, you’ll find below:-

THE FALL WAS ONLY THE BEGINNING

A kingdom ruled by monsters. A continent ravaged by plague. An empire conquered by fascism. The lands of Discordia are welcome to no travelers, but an alcoholic veteran and his companions must find a missing girl who is the key to a secret cabal’s plot to restore order to the world.

Discordia #0 is a comic collection of horror shorts brought to you by the same team that successfully funded Tarnished, an epic fantasy graphic novel, on Kickstarter last year.

Created by Kristopher Jerome and Patrick Buermeyer, Discordia Issue #0 is the launching point for a future ongoing horror series from Dark Tidings Press.

This Kickstarter campaign is raising funds for a physical release of Issue #0 of Discordia, which premiered for free on Webtoon. It consists of three horror shorts set on the continent of Odessa, a land fallen into ruin after a world war.

WAIT? DID YOU SAY FREE?

Yep. We sure did. Issue #0 can still be read in the verticle Webtoon format for FREE here.

If it’s free, why in the heck would you back this project?

From the beginning, we decided to release the Issue #0 shorts on Webtoon to build hype around the project and to serve as a proof of concept before diving into crowdfunding.

If you wanted to, right now, you could leave this page, read the shorts for free, and be on your merry way without giving us a dime. But we don’t think you’ll do that, and here’s why:

1) You get to see Patrick’s art and layouts in all of their glory. He put a lot of work into getting a certain atmosphere onto these pages that you miss out on with the cut-up panels in the verticle format.

2) Physical Copy: Every backer tier above the bottom two levels gets a physical copy of the book, signed by both the writer and the artist. Who doesn’t want that?

3) Variant Covers: We got a talented team together to get us some awesome variants to have added incentives for backers.

4) Stretch Goals: As you’ll see below, the three shorts on Webtoon might not be all of the Discordia tales we have to tell.

5) Future Discordia Content: If this campaign does as well as I think it will, we will be Kickstarting a true Issue #1 of the ongoing series (not more shorts, but an overarching plot with reoccurring love-to-hate characters). Discordia isn’t cheap to make, so if fans never pitched in through sources like Kickstarter, the three shorts on Webtoon would be all of the Discordia content there is. This would be a tragedy, as we already have the next few issues written, and the broad strokes of the story mapped out.

With your help, we are raising $3000 for the physical release of Issue #0.

A creature from Kelviri folklore visits a family, allowing a mother to truly show her love.

Two soldiers from opposing sides of the war flee the fighting and seek shelter with a rural family at their farm. The storm that follows them leaves everything transformed.

During a battle between the Concord and Odessa Rebels, the first appearance of the Plague-Bearers shifts the tide of battle.