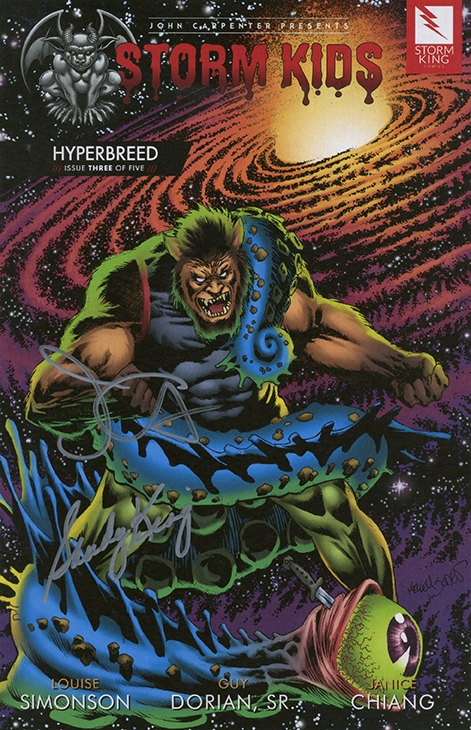 Without spoiling, we review, a sci-fi horror comic, John Carpenter Presents Storm Kids: Hyperbreed Issue 3 which provides sci-fi superhero action along with space and alien horror, in a new story that would be loved by teens and adults alike! Released & available at comic stores, Comixology and Storm King Comics website. (All links provided below the review)

Boomer leads Byrr, Fext and Cammo to a secret Mak pirate base in a quest for Yik Void, a solution that will clear their ship of its crystal infestation, but a series of robot encounters threaten to derail even the best-laid plans. On a positive note, they learn that, given the right circumstances, Explosive Ore really does explode spectacularly.

The Hyperbreed comics explore a sci-fi future space world in which, three humanoid heroes with creature features infused in them for super strength and skills for space are being tested by the life, and luck. Often called “Splices”, they were on a mission to deliver a valuable ore when space pirate monsters attacked their ship, and crystalized most of it. Barely escaping their deaths, our heroes landed in a space colony where they met another splice called Boomer, who could help them to de-crystalize the ship, and obtain the valuable ore, which might settle their lives forever. This issue explores the ordeal of obtaining the substance to clear the crystal, and has more horror as they end up in a place that’s like a dark creepy spaceship graveyard full of robots which would kill them if they’re spotted.

The issue starts off where the second issue left, and we see our heroes leaving the space colony while fighting off drunk humans, alien monsters, and they’re also figuring out how to get the substance to clear the crystal from their ore filled ship. There’s a lot of action, but the horror in the end is real with the heroes being hunted by scary space robots with sharp weapons. There’s a lot of subtle humor, and informal dialogues as the case with the other issues which helps to keep the mood upbeat despite horror, and serious situations of life or death. Boomer is a great addition to the team, but a mysterious one for sure. The three heroes never fail to entertain the readers with their heroics, witty dialogues, and smart way of solving problems. The issue ends in an awesome way, and makes you eager to read the next issue!

Overall, filled with scares, action, some comedy, and an exciting story, Hyperbreed Issue 3 keeps the excitement level high, and takes the action to an explosive next level with horror, and humor to spice things up. A must read for any sci-fi space horror fan

Our Review of other Hyperbreed issues: