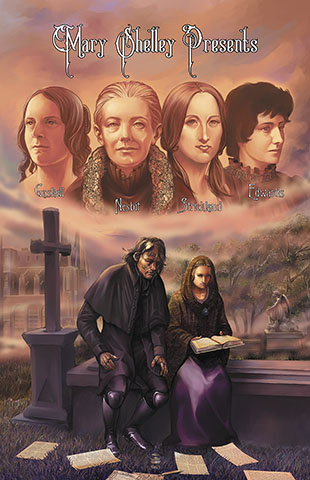 Ghosts, shapechangers and ancient curses — Mary Shelley and her creature present horror stories written by women of the Victorian era.

“That night I dreamed of The Creature, pieced together from corpses, revived … and unloved. His tragedy has granted me immortality. Other women writers of my time have not been as lucky. Famous once, their ghostly stories now gather dust.”- Mary Shelley

Written by New York Times best-selling author Nancy Holder, this trade paperback version of Mary Shelley Presents: Tales of the Supernatural adapts the short stories of four women horror writers of the Victorian era, each story beginning with a special introduction by Mary Shelley and her creature. These stories were originally penned by Elizabeth Gaskell, Margaret Strickland, Edith Nesbit, and Amelia Edwards. All of these women were as famous as their male counterparts in their time and should be remembered today. To that end, each book includes the stories in their original prose in the pages following its graphic adaptation.

Written by NYT Bestselling author, Nancy Holder, and published by Kymera Press, Mary Shelley Presents Tales of the Supernatural Paperback, besides having plenty of bonus content, primarily showcases 4 Victorian era horror tales written by female writers brought to life in the comic (graphic novel) format while staying true to the original premises albeit making them scarier, better, and more exciting.

The first story is “The Old Nurse’s Story” by Elizabeth Gaskell, which shows a young girl becoming the target of a ghost that haunts the Victorian house which has a dark past. The second story, “Man-size in Marble” by Edith Nesbit, is about a couple who start a new life in a quiet town while trying to make a living by writing about the local folktales but on one fateful Halloween eve, their lives change forever. The third story, “The Case of Sir Alister Moeran” by Margaret Strickland, provides creature horror as we see mysterious animal attacks which leave the locals in fear as there is something more than it meets the eyes. The forth story, “Monsieur Maurice” by Amelia B. Edwards, is about a well-mannered French political prisoner who befriends the young daughter of the German colonel who is given the responsibility of watching over him, but the paranormal events near the forest test the friendship, patience and also provides a reminder that real friends never hesitate to make sacrifices. The stories often have a moral lesson, and the readers can easily relate to the emotions or the situations regardless of the time period or location differences with our current world. That’s how well written the dialogues are.

Every horror tale is beautifully written, and adapted to the modern standards while keeping the core intact. The psychological horror is very high especially involving ghosts. Each story as introduced & concluded by Mary Shelley with inputs from the Frankenstein’s creature is a great way of knowing more about the famed Mary Shelley’s life, and also the comments by them feel very genuine, which shows the narration skills of Nancy Holder. The foreword of this book by the award winning author Lisa Morton is helpful in knowing why this book was essential to remind the horror fans about the forgotten female horror authors, and also the struggles Victorian era female authors had to endure when it was often forbidden or frowned upon to see women enter the field of literature (or any field for that matter). Foreword by Nancy Holder & Kymera Press’ founder, and writer D. Lynn Smith (Debbie Smith) before every story tells us about why they chose each story, what inspired them, and what hidden meanings each story has. The book is rated as “for teens & above” but I would say that even children would love it besides adults as the content is appealing to everyone.

Overall, the 212 paged fully colored horror graphic novel, “Mary Shelley Presents Tales of the Supernatural Paperback” thrills, entertains, and amazes with its stories, characters, and supernatural elements. Besides the graphic novels, also included in the book are the original stories in the text form, a beautifully scary poem by Isabelle Banks (1898), book foreword by award winning author Lisa Morton, thoughts about each story by D. Lynn Smith & Nancy Holder, and beautiful bonus artworks. Also available as 4 individual stories, but this package provides so much bonus content that it feels worth having in your collection, not just as a horror fan, but also as a way of appreciating the classic works of female writers. A must read for anyone curious to know about classic horror literature, and authors while getting some entertainment in the process.

Sample Pages (From Issue 2 but the art style is similar, thus, a good representation):

Here’s a look at a few pages from the second book in the series. The story is titled Man-Size in Marble and is by Edith Nesbit with the graphic adaptation by Nancy Holder.

Please click here to visit the Official Kymera Press Store to get yourself a copy!

Connect with the Publisher & Author:

Mary Shelley, Mary Wollstonecraft Shelley was an English novelist who wrote the Gothic novel Frankenstein; or, The Modern Prometheus. She also edited and promoted the works of her husband, the Romantic poet and philosopher Percy Bysshe Shelley – Wikipedia

Elizabeth Cleghorn Gaskell, often referred to as Mrs Gaskell, was an English novelist, biographer and short story writer. Her novels offer a detailed portrait of the lives of many strata of Victorian society, including the very poor, and are of interest to social historians as well as lovers of literature – Wikipedia

Margaret Strickland (c. 1880–1970) was a prolific American writer of magazine stories and novels for adults and children, including the Michael Gerahty detective novels. Her works and papers have been collected by New York University‘s Fales Library – Wikipedia

Edith Nesbit was an English author and poet; she published her books for children under the name of E. Nesbit. She wrote or collaborated on more than 60 books of children’s literature. She was also a political activist and co-founded the Fabian Society, a socialist organisation later affiliated to the Labour Party.- Wikipedia

Amelia Ann Blanford Edwards (7 June 1831 – 15 April 1892), also known as Amelia B. Edwards, was an English novelist, journalist, traveller and Egyptologist. Her successful literary works included the ghost story “The Phantom Coach” (1864), the novels Barbara’s History (1864) and Lord Brackenbury (1880) and the Egyptian travelogue A Thousand Miles up the Nile (1877). In 1882, she co-founded the Egypt Exploration Fund. She also edited a poetry anthology published in 1878. – Wikipedia