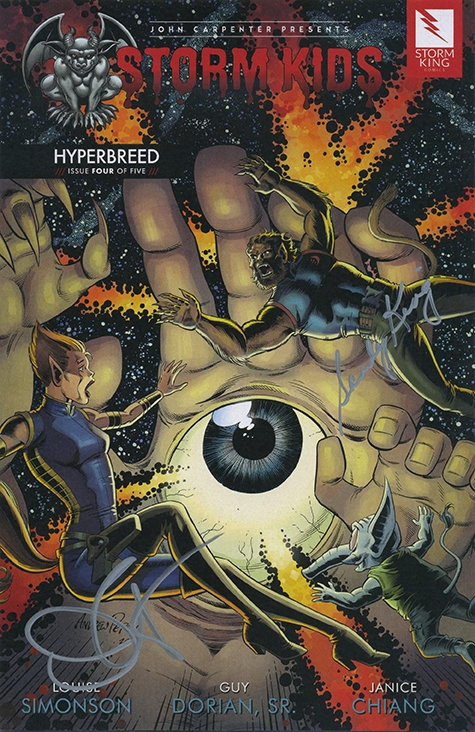 Without spoiling, we review, a sci-fi horror comic, John Carpenter Presents Storm Kids: Hyperbreed Issue 4 which provides sci-fi superhero action along with space and alien horror, in a new story that would be loved by teens and adults alike! Released & available at comic stores, Comixology and Storm King Comics website. (All links provided below the review)

Things are starting to look up! Byrr, Fext, Cammo and Boomer reach their freighter. Yik Void begins to clear it of its crystal infestation. Then Mak pirates return, led by their monstrous captain, Eye-5. Did Boomer betray them to the Maks? Or is there more to the story? Dead splices tell no tales.

This 4th issue of John Carpenter Presents Storm Kids Hyperbreed horror sci-fi comic book series follows the futuristic story of three human-animal hybrid super species called “Splices” which were created by humans for dangerous space missions. They were on a space mission to deliver a precious ore when alien monster pirates attacked the spaceship, crystallized it, and they had to escape to a nearby space colony. They met another Splice named Boomer who offered to help them find a substance to get their spaceship cleaned of the alien crystal. This issue shares the ordeal of getting the spaceship cleaned, while also revealing some major twists.

Our three heroes somehow got the substance after almost getting killed by alien robots in the scary spaceship graveyard. Now, they get their new harrier near their crystalized spaceship, and then decide to enter and do the cleanup. While doing the cleaning, they face the trouble of mess which is created by the substance dissolving the crystal. They also discuss about the Earth, corporation which employed them before placing a bounty on their heads, the motive of alien pirates, and conspiracy which has now endangered them, and planet Earth. This issue has some major scenes involving alien pirate monsters, and they look pretty scary indeed. In fact, the cover art is among the scariest I have seen yet. The issue makes the readers excited for the next issue in which the stakes are very high.

Our Review of the previous issues: