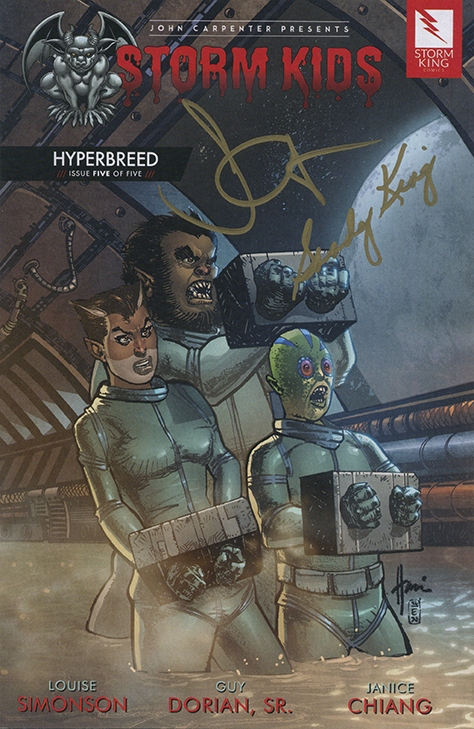 Without spoiling, we review, a sci-fi horror comic, John Carpenter Presents Storm Kids: Hyperbreed Issue 5 which provides sci-fi superhero action along with space and alien horror, in a new story that would be loved by teens and adults alike! Released & available at comic stores, Comixology and Storm King Comics website. (All links provided below the review)

Countdown to destruction. Byrr, Fext, and Cammo risk all
as they make a final mad attempt to escape the monstrous Maks,
destroy Eye-5’s pirate fleet, reveal the Corporation’s treasonous
activities to the Government of Earth, and save the Earth
from a looming Mak invasion.

John Carpenter Presents Storm Kids Hyperbreed series follows the tale of a futuristic space world in which humans have created humanoid animal hybrids (Hyperbreeds) called “Splices”, and three of them are the main focus of this series. Our heroes were on a human corporate mission to deliver an expensive ore but their spaceship was attacked midway, and had the ship crystalized by an alien substance. They thought that getting the ore back from the spaceship, and delivering the ore would solve their problems but they found out a conspiracy that threatens their lives, and planet Earth too.

Issue 5 is the finale of the exciting story that has been building up since the first issue. As we saw in the previous issues, our heroes are masters of problem solving, and this issue’s cover shows them in alien handcuffs, thus the plot is obviously about escaping the alien monsters. When all of their previous efforts seem fruitless, the team start thinking to get out of the dangerous situation while saving the Earth in the process too. The horror is visible as the antagonist Eye-5 monster is seen throughout the comic, and the question of whether our heroes can escape their capture always comes to the mind of the readers. Despite the stressful, and suspenseful story of this issue, there are some humorous dialogues, and scenes whenever appropriate to stop things from becoming monotonous.

The comic book is fully colored, with appropriate color tone for horror & sci-fi genre. The illustrations are realistic, and especially scary when it comes to monsters. Story is well paced, and perfectly executed. Effective psychological horror is delivered with minimum gore, or mature content which makes it a perfect treat for teens and above. I am amazed to see the well written comic which not only completes the story in less than 30 pages, but also provides us with a free sneak peak (sample pages) of the next offering by Storm King Comics, called “Sacred Hearts” horror comic.

Our Review of the previous issues: