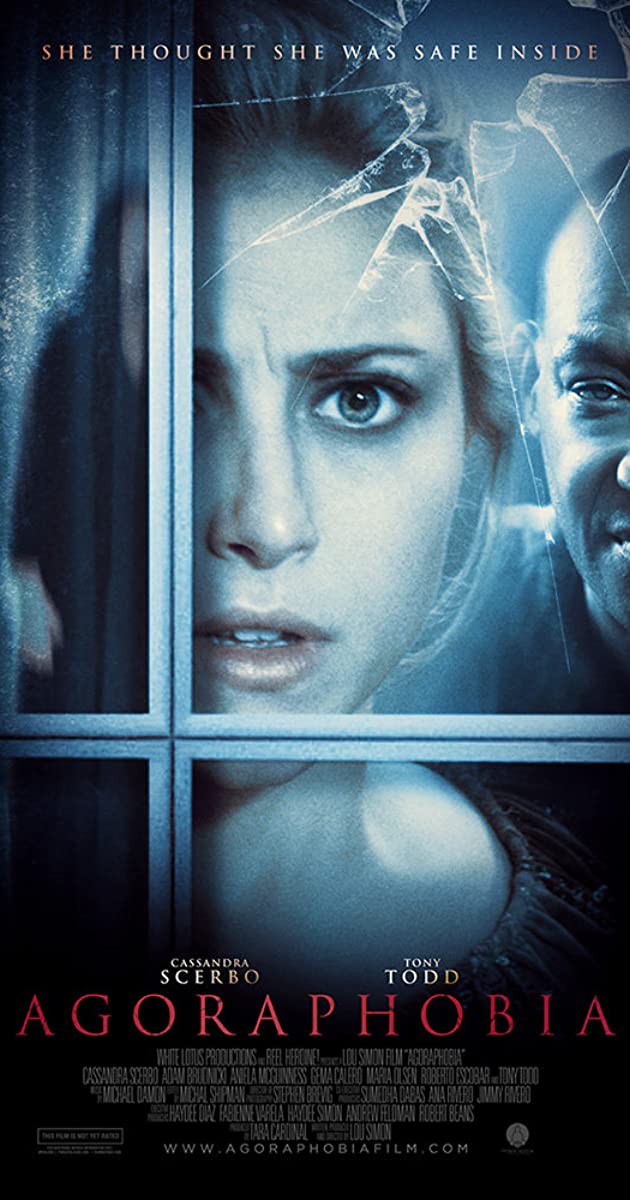 Without spoiling, we review independent horror feature film by Lou Simón called Agoraphobia (Filmed in 2015 but released in the North America on Feb 12th, 2021 after winning a long legal battle) starring Cassandra Scerbo, Tony Todd, Adam Brudnicki, Maria Olsen, Aniela McGuinness, Roberto Escobar, Gema Calero, and Julie Kendall. Now available to rent or purchase from Amazon Prime Video, we tell you why it’s a must watch because not only it tells a ghost story but also explores the life of an agoraphobic patient, besides, human nature.

The film tells the story of an agoraphobic who inherits her father’s house in a remote part of the Florida Keys. Afraid to go outside, she discovers that there’s something far more terrifying trapped inside the house with her. Cassandra Scerbo plays the role of the agoraphobic, Faye, and Tony Todd plays her psychiatrist, Doctor Murphy.

The horror film starts with a scary and gory scene which connects with the film’s story as revealed near the end. Back to the present day, we are introduced to the protagonist, Faye  (Cassandra Scerbo) who’s suffering from agoraphobia, and is living in the house she inherited from her father. Psychiatrist Dr. Murphy (Tony Todd) is giving her a treatment but her condition is not improving.  Her partner and friends are concerned about her, and they become terrified when she describes seeing an apparition, and instances of household items changing position on their own. Dismissed as her imagination or side effects of the medication, the paranormal activity slowly starts affecting all.

After a series of odd, terrifying, and deadly events (and accidents), Faye pleads her partner to take her somewhere else as the home definitely seems haunted but due to some legal contract, he says they can’t. This is when Faye decides to investigate what exactly happened here. Her aunt (Maria Olsen ), and Detective Martinez (Roberto Escobar) helps her out in many ways which leads to some surprising revelations. The film’s climax is a great exciting mix of paranormal fear as well as of human conspiracy.

Produced by Tara Cardinal, the horror movie is more than just a ghost story, as it involves exploration of the pain which a patient of agoraphobia goes through, which is excellently showcased by the acting of  Cassandra Scerbo as the leading lady. Tony Todd as the psychiatrist is definitely an important part of the movie, and his scenes are effective in moving the narration forward. Adam Brudnicki  as Tom is memorable, Maria Olsen as Aunt Margie is as effective as Tony Todd, while Aniela McGuinness as Stephanie, Roberto Escobar as Detective Martinez, Gema Calero as Nina, and Julie Kendall as Elizabeth have all gave justice to their respective roles regardless of the screen time. The writing, and direction by Lou Simón is well executed to provide a rollercoaster ride of paranormal events which end with shocking twists yet with a satisfying ending. The movie has a super fine look to it, and the cinematography by Stephen Brevig makes it look gorgeous. Editing by Michal Shipman adds smooth transitions to the movie, and while you may feel that some discussions were unnecessary at the start, I think it helps the character development, and shows the mundane routine of an agoraphobic patient who cannot go out. The music by Michael Damon, and sound effects add to the scary atmosphere. The special effects by Rene Quesada add a shocking level of realism to the scary scenes, and makes the apparition feel genuinely scary.

In conclusion, the award winning independent horror feature film agoraphobia is one of the most unique horror films which shows a story of paranormal activity, human nature, and the struggles of a person affected by agoraphobia. If you would love to watch a scary ghost story filled with twists, scares, and showcase of human nature, this is a must watch.

The film is available to rent and purchase on Amazon at https://www.amazon.com/Agoraphobia-Tony-Todd/dp/B08MWL7X8D/.

Read more about the release:-

Horror Needs You! Please Donate to Everlasting Hauntings // Everything Horror Podcast via PayPal to help the noble cause of promoting horror genre & indie horror creators:– http://paypal.me/ehpodcasts OR Support us on Patreon:- https://www.patreon.com/ehpodcasts