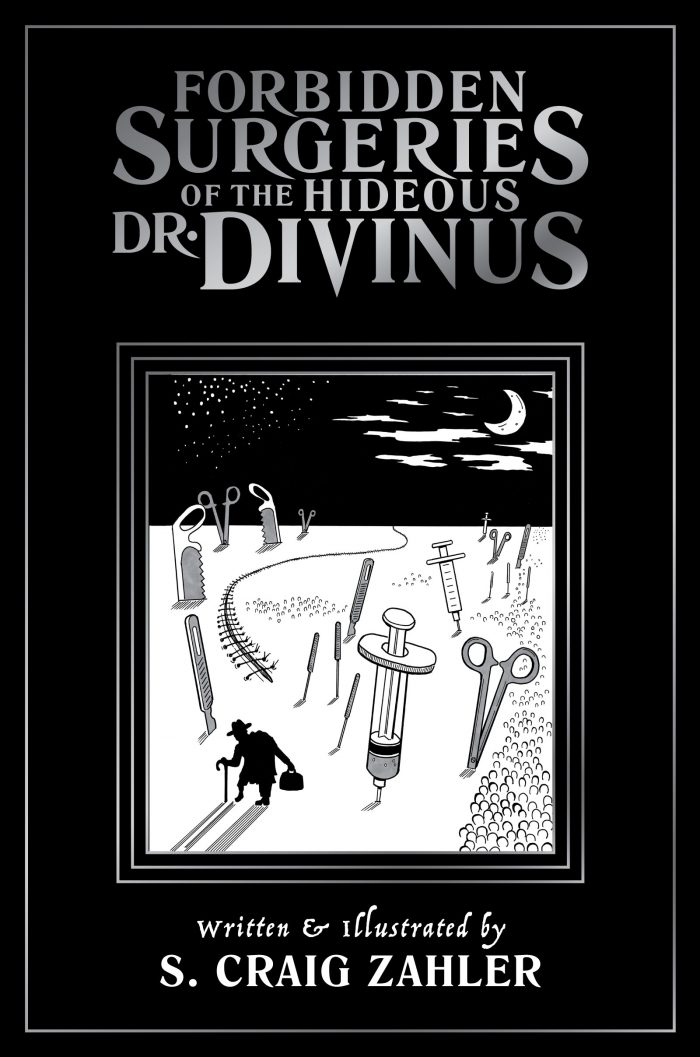 Without spoiling we review, Forbidden Surgeries of the Hideous Dr. Divinus written & illustrated by S. Craig Zahler, a 104 paged horror comedy graphic novel in black and white published by Floating World Comics. We tell you why it’s a scary, funny, and twisted ride you need to take!

After three startling, award-winning movies that have played around the world and been added to the permanent collection of the Museum of Modern Art, S. Craig Zahler wanted to return to his first artistic passion – illustration. He committed himself to writing, drawing, inking, and lettering his graphic novel debut, a full-length work of noir horror.

Homeless people are disappearing in New Bastion, and occasionally, a dismantled corpse turns up in a dumpster. These crimes are left alone, until the day a comatose woman named Lillian Driscoll is kidnapped from the hospital. Her brothers – a grumpy detective named Leo and a slick mobster named Tommy – seek answers that lead them to darkness, arcane medicine, and pain.

Fans of Bone Tomahawk (recently named best film of the decade by Conan O’Brien) will enjoy Zahler’s return to the supernatural, and the idiosyncratic, tough guy dialogue found in his crime pictures Dragged Across Concrete and Brawl in Cell Block 99 (both of which premiered at the Venice Film Festival) is also present in this starkly rendered, black-and-white graphic novel, a stylistic confluence of pre-code horror, vintage comic strip, and modern indie art styles.

Forbidden Surgeries of the Hideous Dr. Divinus written & illustrated by S. Craig Zahler is full of humor, shocking visuals, and sick minds. It’s a 104 paged horror comedy graphic novel in black and white published by Floating World Comics is entertaining due to its characters who feel dear to you even after a brief introduction. Situations which make you laugh, are often followed by some of the most disturbing surgeries you’ll see. This is the uniqueness of Zahler’s graphic novel.

It all starts with a homeless elderly man on the street who gets an offer of food in exchange of his blood sample by a stranger in a van. He reluctantly accepts it as the things aren’t working out for him anymore. After a while he gets abducted for no reason, or perhaps for a very sinister reason….

At a hospital, the readers get to see some likable security personnel and an incident of an unknown man trying to steal an equipment which results in a scary consequence after the security team tries to track him, and stop him.     Furthermore, we see some strange incidents of abductions. Then there’s a scary origin story of a child who looks like it has a lizard skin on the half of its body. There are many Interesting characters with exploration of human relationships, life, death, and interest in the art of surgery taken way too far. The main premise seems to be the connections all of these stories have with the main antagonist who seems to be up to no good. The graphic novel ends with the hope of a second book, and as the end note by the author confirms, it’s most likely that it will happen. It would be interesting to see how the antagonist is stopped, and by whom.

The graphic novel is a horror comedy hybrid but has more leaning towards slasher, and shock horror, so, the  disturbing visuals, and shocking scenarios help the book to remain scary. The writing and illustrations by S. Craig Zahler keep things interesting till the last page. The humor just feels like a way of calming the reader down after seeing a lot of shocking sequences. There are suggestive themes, nudity, disturbing crimes shown and mature content. So, this is definitely a book for an audience above 18 years old because this is an interesting semi-paranormal horror story in a big bad real world with no mercy.

In conclusion, S. Craig Zahler’s graphic novel “Forbidden Surgeries of the Hideous Dr. Divinus” is entertaining, scary, and often funny in a unique horror comedy way. If reading a horror comic with shocking visuals, a disturbing story, and interesting characters is something you like, then this is a must read.

Get the Book Today:-

Check out the Goodreads Page

S. Craig Zahler is an award-winning screenwriter, director, novelist, cinematographer, and musician. Zahler’s debut western novel, A Congregation of Jackals (2010) was nominated for the Peacemaker and the Spur awards, and his novels Mean Business on North Ganson Street (2014) and Corpus Chrome, Inc. (2014) both received starred reviews in Booklist. He is also the author of Wraiths of the Broken Land (2013), Hug Chickenpenny: The Panegyric of an Anomalous Child (2018). Most recently, Zahler wrote and illustrated the forthcoming graphic novel Forbidden Surgeries of the Hideous Dr. Divinus (2021). In 2015, Zahler wrote, directed, and co-composed the score for the film Bone Tomahawk, an Independent Spirit Award nominated picture (Best Screenplay; Best Supporting Actor) starring Kurt Russell, Patrick Wilson, Matthew Fox, and Richard Jenkins. The film garnered praise from critics and fans alike, including the New York Times, who called it, “[a] witty fusion of western, horror and comedy that gallops to its own beat”. Zahler more recently wrote and directed Brawl In Cell Block 99, a New York Times Critic’s Pick, starring Vince Vaughn, Jennifer Carpenter, and Don Johnson, which premiered at the Venice Film Festival and also went on to critical acclaim. Both movies were added to the permanent collection of the Museum of Modern Art in New York City in 2017.
Zahler’s third movie was the epic noir Dragged Across Concrete, which premiered at the 75th Venice Film Festival in 2018, showed at the London Film Festival, and also to a sold out crowd for the closing night of Beyond Fest. “[P]uts you on the edge of your seat,” (RogerEbert.com); “A singular voice in cinema,” (Movies in Focus); “[A]n idiosyncratic cop movie masterstroke,” (Birth.Movies.Death); “A sprawling, gritty action noir, gorgeously lit and morally challenging,”
(Projected Figures); “[S]uperb performances, a fabulous script…never goes where you expect,” (Nerdly UK); “One of genre’s most exciting filmmakers” (Indiewire); “Inventive and nasty,” (Guardian).

Horror Needs You! Please Donate to Everlasting Hauntings // Everything Horror Podcast via PayPal to help the noble cause of promoting horror genre & indie horror creators:– http://paypal.me/ehpodcasts OR Support us on Patreon:- https://www.patreon.com/ehpodcasts