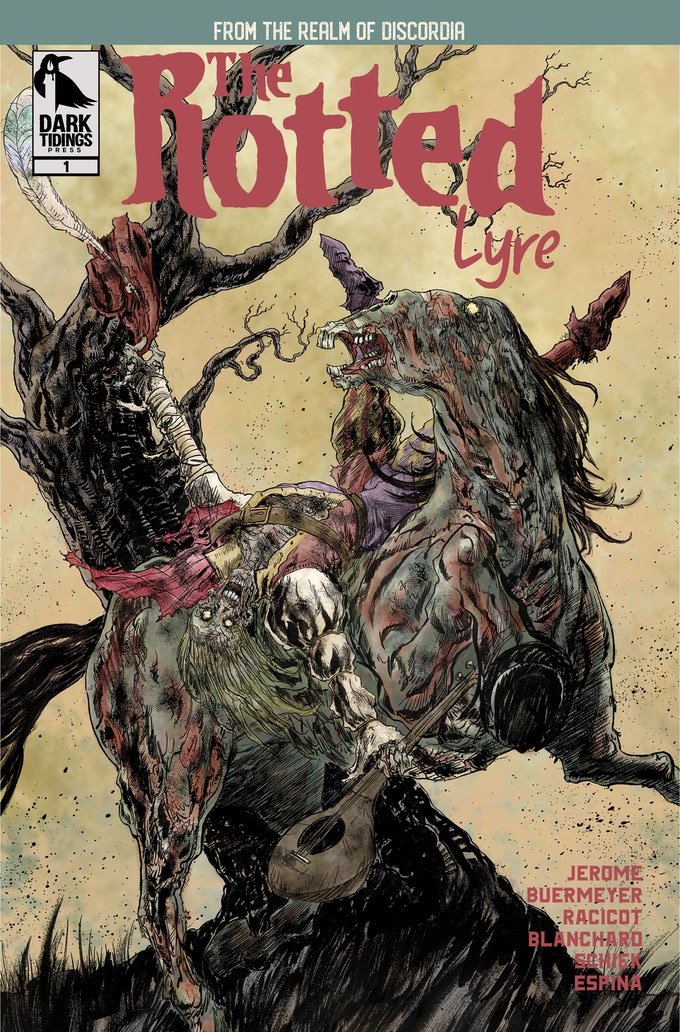 Without spoiling we review the horror comic book, Discordia : The Rotted Lyre Issue #1  a collection of poems, legends, and folktales each illustrated by a different artist.

The undead bard Bendilewynn shares three poems from the Kingdom of Alventi, each brought to life by a different artist.

Something Wicked from Below (Sam Blanchard)- A maiden’s lover is lost at sea. One day he washes back ashore, clinging to life. But is he what he once was?

The Thorny Throne (San Espina)- Deep in the moors of Alventi lies the Blighted Throne, an ancient seat that predates all known history of the region. What would happen if one was to sit upon such a landmark?

Whitebeard (J. Schiek)- A strange man is cast into the pit by the gods. Upon his return to the world above he wreaks havoc on the people of Alventi

Discordia The Rotted Lyre horror comic is a collection of four (yes, one more than mentioned!) well written poems with a unique take on horror that will make you feel amazed and terrified at the same time.

Discordia comics tell stories from the world of a region that’s war torn, and full of supernatural creatures. In the Rotten Lyre, the war is not the main focus as is the case with Discordia 0 or Discordia Apocrypha. Discordia The Rotted Lyre starts with a professor writing a book (notes or bard’s poems) about the region and cities full of supernatural beings, and odd culture. We see a scary horseman arrive, and then the short stories in poetic form start.

The first story is about a lady whose lover has been lost in the sea while she’s on a ship. The tales of mermaids and sirens combine with the feeling of love from the Titanic movie along with sea creatures looking as scary as those from Pirates of Caribbean to make this story one of the scariest about the sea and things from the ocean.

The second story is about a cursed throne in which two brothers stumble upon, and then something sinister happens. The story and the setting both are unexpectedly scary. What scares the most is the effect of the horror in the story.

The third story is of a bearded man from the deep pits of the Earth, which almost feels like Hell or a cave. The bearded man is among the strangest and horrifying tale of an animal in the body of a human who’d do anything to get his desire for blood, flesh, and more.

The fourth story describes a ruler of a city who has a lot of dark secrets within his castle. The city is among the most prosperous of the region, and thus people are happy but soon, strange things start happening and people start going missing. They all turn against the ruler who once was their source of income and good luck. The story’s outcome seems very apt, and of a grand scale which ends off the book on a high note before revealing to us the fate of the original professor who appeared at the start of the book. Promising more books in future, as promised by the upcoming Kickstarter campaign in 2021.

All stories are very intriguing and easy to understand due to the poetry form of storytelling. The illustrations, and characters are both well made. The lettering and fonts help to give this comic book an effect of a poetry book being read while the situations come to life in front of your eyes. The collection of four stories helps to keep the reader interested without feeling bored because none of the stories drag on for too long. The horror is intense, mature suggestive themes are present in a story, nudity in horror context, along with some cruelty being shown. Thus, only a mature audience should read this to have a complete understanding of the depths of the horror, and crimes being shown here.

In conclusion, Discordia The Rotted Lyre Issue #1 Horror Comic book is a beautiful, scary, and well made collection of horror themed poems which come to life thanks to the writing, characters, and remarkable illustrations. For any mature reader interested in horror, poems and some unforgettable illustrations, this is a must! Follow the creator on Twitter to stay updated about their upcoming Kickstarters from where you might get the opportunity to grab one copy.

Official Info from the Kickstarter Archive:—-

The contents of the Rotted Lyre #1:

Something Wicked from Below

A maiden’s lover is lost at sea. One day he washes back ashore, clinging to life. But is he what he once was?

Deep in the moors of Alventi lies the Blighted Throne, an ancient seat that predates all known history of the region. What would happen if one was to sit upon such a landmark?

A strange man is cast into the pit by the gods. Upon his return to the world above he wreaks havoc on the people of Alventi.

Check out our other Discordia reviews-

More about the world featured in the horror comic-

The Continent of Odessa, map by Ralaris Maps