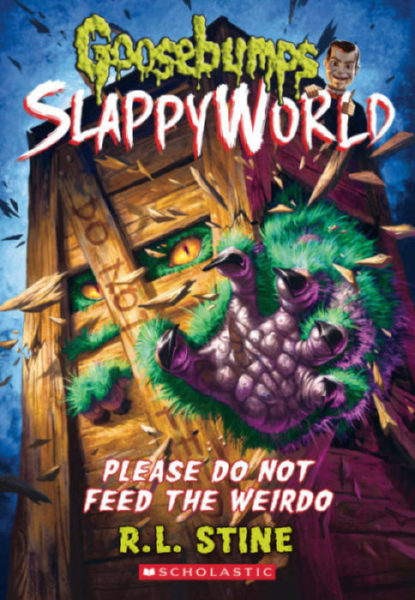 A brand new Goosebumps arc narrated by the most iconic and evil character of the series, Slappy! Robby and his sister Karla beg their parents to take them to a big carnival that has opened on the other side of town. When they arrive, the two kids are delighted by the rides, the sideshow, the interesting displays, and the great food booths. They wander away from their parents and find themselves at a less-trafficked area at the back of the carnival. Inside a large penned-in area, they see a dejected-looking boy about their age sitting on the grass. A sign on the tall metal fence reads: PLEASE DO NOT FEED THE WEIRDO. The kids are reluctant to disobey the sign, but the boy seems really nice. Karla hands him her cone through the fence. He thanks her very politely. He eats the ice cream, delicately at first, then ravenously, noisily-and as Robby and Karla stare in horror, he transforms into a raging, hairy beast.

That’s right, we are back for another review that will make you want to scream, hahahaha. (Clears throat) now this was another fun one to listen to (reading is available too…) because it felt like the 3 hours or so of the narration and Joe really felt organic to have a full satisfying taste. No?

Robby and Karla spend a day (weekend day) at a local carnival, there they went on rides and played a bit. However upon a tragic event which lead Robby stuck on a ride…. The children discover what seems to be an ordinary child locked up with a sign stating “DO NOT FEED”. Which obviously doesn’t end well, because if they happened to listen to the sign like everyone else walking pass… We wouldn’t have this exciting tasty treat from R.L. Stine.

Afterwards the hunger doesn’t stop there. Robby and Karla now have to deal with this hungry beast out in the neighborhood, the kicker? It can transform into anyone while disguising his voice to match the same person that he is impersonating. It’s up to Robby to stop the carnage before it REALLY gets bad if not destroys the neighborhood.

I highly recommend this full meal (okay I’ll stop…) story. Because it’s got a nice pace without feeling to dough while trying to figure out who they are impersonating, a trick of knowing? Feed the person and see what happens….