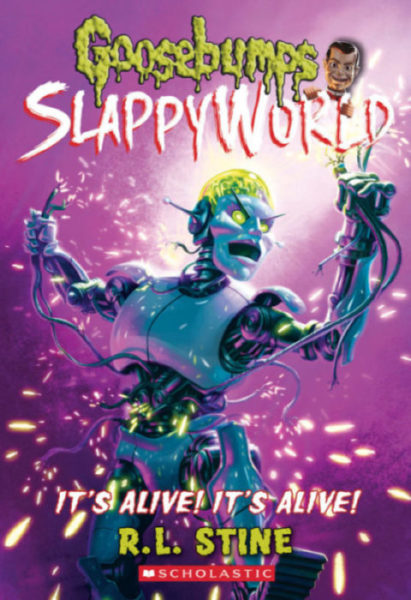 Livvy and Jayden are the stars of their school’s robotics team. Livvy is especially enthusiastic because her own mother works in a robotics lab and experiments with Artificial Intelligence. To impress her mom, Livvy and Jayden build a robot. Livvy wants to name their robot “Francine,” but Jayden thinks that’s too silly for their creation. Desperate to win, Livvy and Jayden “borrow” an Artificial Intelligence module. They soon realize they’ve made a terrible mistake. Francine has too much brain power. She’s alive! And using this newly gained brain power to dream up a deadly contest!

If you’re a fan of Annilator 3000 from Give Yourself Goosebumps, Toy Terror: Batteries Included. Then Francine will do just fine with you, as long as you watch what you programmed into her muwahaha.

Winning the robotic contest would be a dream come true for our friend, Livvy does possibly the nightmarish idea ever for a robot. It’d be like adding a serial killer mind to Frankenstein, rather than a normal one. But how far will you go to win? Especially when your enemy talks so much praise for his that yours couldn’t possibly compete against.

As the competition closes closer, Livvy and Jayden who have put a lot of effort into their robot, Francine. Starts to do horrible things that they didn’t program. It almost seems Francine has her own mind. However there is also something else strange going on inside the house. A secret Laboratory that both kids cannot enter, for a chance of contamination of “germs”.

As it concludes from R.L. Stine story of Robotics and twists and turns. Slow burn at first, yet it gets more machinery than it leads on. Like I mentioned if you’re a fan of Annilator 3000, “Its Alive! Its Alive!” will be your treat.