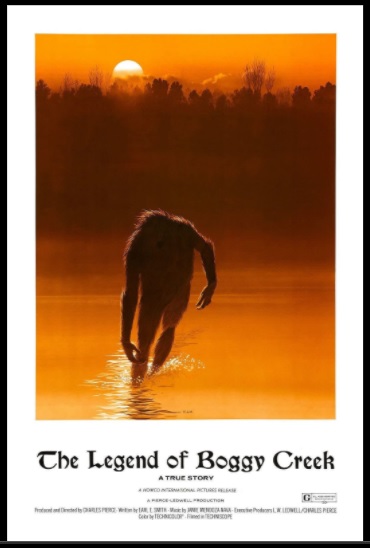 Without spoiling, we review “The Legend of Boggy Creek” – A 1970s documentary-style drama questions the existence of a hairy 7ft tall Sasquatch-type monster that lives in a swamp outside of Fouke, Arkansas! Available to Rent or Purchase as the newly remastered The Legend of Boggy Creek on the following platforms-
YouTube Movies, Amazon Prime, iTunes, Google Play

The Legend of Boggy Creek was conceived and directed by Arkansas native, Charles B. Pierce. The movie was released independently in 1972, where it initially played in sold-out theaters in the Arkansas and Louisiana areas. In 1973, it was picked up by the film distributor Howco International, who made it widely available in theaters across the country. The Legend of Boggy Creek, which cost around $160k to make, became extremely popular in the 1970s, playing for many years in theaters, drive-ins, and later on television. It made an estimated $25 million dollars by the end of its run.

The movie was inspired by true events that happened in the small town of Fouke, Arkansas. When people there began reporting sightings of an agressive sasqsuatch-like creature known as the “Fouke Monster,” it caught the attention of Charles Pierce who turned it into a successful film that is still remembered to this day.

Believing that someone saw a bigfoot or something paranormal is always difficult.  Proving it when we have seen a glimpse or a possibility is even harder. Creating a documentary about it is as hard. Read on to know why this documentary does a great job at educating, entertaining and scaring you!
The documentary is about a legend of a bigfoot like creature called the “Fouke Monster” due to the creature appearing in Fouke, Arkansas, the US. It is based on true events and witness accounts. Pamula Pierce Barcelou has gained copyright to one of her father Charles B. Pierce‘s most beloved films, “The Legend of Boggy Creek,” and is making sure that the fans across the globe can watch it in the best possible way. Starting off cinematically with scenic places of the US being shown and a kid running through beautiful fields to the grownups in the city nearby to tell them about what he saw only to get laughed at. We also see the perimeters of homes being secured through barbed wires. Investigations being conducted by the locals and then the actual witness account being dramatized of an attack by the creature that terrorized a family. The documentary makes you think, wonder and some scenes genuinely scare you regardless of what you feel about the legend. The documentary’s climax is action packed and it ends in the best possible way to show that there’s always a scope for future research as well as sightings.
The documentary has historical value due to the well structured description of all the events and places. Many of the people you’d see are real witnesses portraying themselves in the actual locations. Editing and direction both have made it a cohesive and entertaining documentary that often feels like a movie, especially near the end. The entire cast and crew have worked hard and we can observe that through the high quality of performances and the technical achievements of the documentary. This is no footage so the quality is professional with the documentary looks crisp even at the lowest resolution and phenomenal in 4K. The cinematic feel is prominent in the scenes where the outdoors are seen with great angles and indoor scenes increase the intensity of the horror and suspense. Some scenes even remind me of the remarkable nature of the classic Exorcist or the recent The Conjuring titles. The sound effects, music and narration add a lot of cohesion and consistency to the documentary. With mild horror and no mature or objectionable content, this is a great watch for audiences of all ages!
In conclusion,  The Legend of Boggy Creek horror documentary scares, entertains and educates about the legend. It makes you curious about the legend and also about the places being shown. It’s a must watch whether you believe in the legend or not!

History and the Book-

“If you’re ever driving down in our country along about sundown, keep an eye on the dark woods as you cross the Sulphur River bottoms… you may catch a glimpse of a huge, hairy creature watching you from the shadows.” – The Legend of Boggy Creek

The Legend of Boggy Creek was inspired by eyewitness reports of a sasquatch-like creature said to live in the rugged bottomlands near the small town of Fouke in southwest Arkansas. The “Fouke Monster” – or “Boggy Creek Monster” as it came to be called – came to the attention of locals when it was sighted several times in the 1960s. In May of 1971, a family was reportedly attacked at their rural home which sent one of them to the Texarkana Hospital with injuries. This incident came to the attention of local news reporters who published the story in the Texarkana Gazette newspaper. The resulting attention brought forth other witnesses and eventually inspired Charles Pierce to build a movie idea around the story of the Fouke Monster. Over the years, sightings of the creature have been reported by countless people, including respected citizens, experienced hunters, famous musicians, and even a police officer. The release and ultimate success of The Legend of Boggy Creek brought the creature to worldwide fame, but sighting reports did not stop in the 1970s. Near the small town of Fouke, southeast of Texarkana, people are still reporting encounters with this mysterious creature even today.