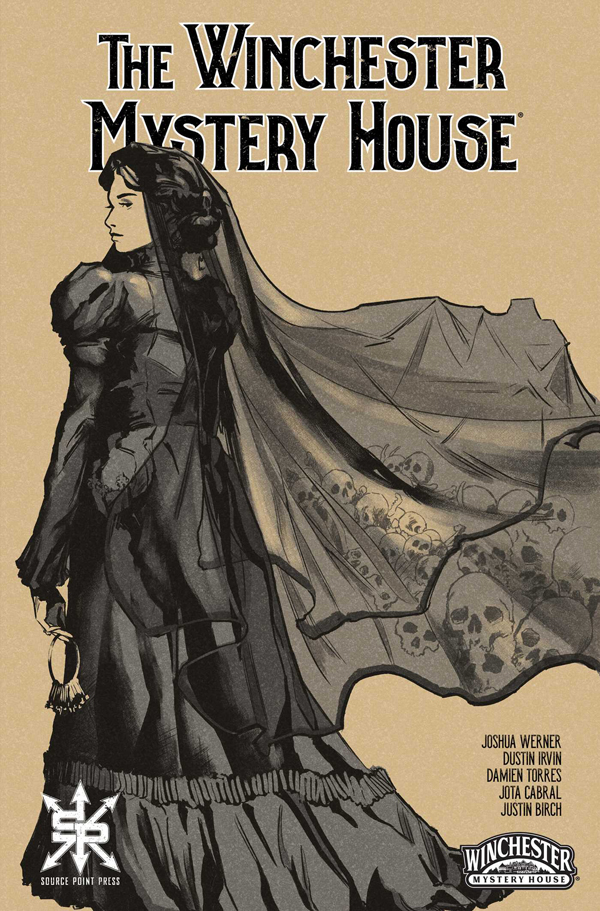 Thought to be one of the most haunted placed in the world, the Winchester Mystery
House is much more than an architectural wonder. It’s a labyrinth full of secrets. Come step inside and hear the house’s whispers…

Inspired by true events, this masterfully crafted horror tale written by Joshua Werner and beautifully illustrated by Dustin Irvin and Damien Torres takes you into the non-stop construction of “the house that spirits built” and its brilliant owner, Sarah Winchester.

The introduction alone for this trade paperback of Volume One, contains a very well insight from Joshua Werner. The behind the scenes of the communications to also an idea of only why three issues for the beginning of a long story and well, constructions of a mysterious house. That to this day, still holds true, as it’s better to see in person. However, I personally haven’t had that privilege, but Winchester Mystery House actually made a Vimeo video for those that aren’t local and can’t travel. Link down at the bottom.

Chapter 1: The Heart of the House gives the readers a bit of the background of Sarah in 1886, she isn’t a stranger when it comes to loss and death, since first the greatest loss of all, a child. Next came the Husband, taken by the dreadful disease of that century, tuberculous. And as quickly as one would to start preparations on a home. Sarah wasted no time hiring helping hands full time, because now it was all up to Sarah to build to house all the spirits that died from the hands, of the Winchester Rifles. Sarah detailed out the first project, known as the Heart of the House. With thirteen showing up quite a bit around certain rooms, if not all doors as well. The spirits walk amongst the workers as well, too bad Hank seems to like the booze a little too much as well it seems. As the room is completed, Sarah was able to have an escape for the night.

Chapter 2: The Puzzle brings us up ten years later, 1896. And I now want to mention that also within the last issue, Sarah hired a professional person that would be able to grow anything she wanted to make the “best Garden in the United States.” And, with that, a rare import tree came in from Argentina. Here in this issue, we learn about the Bell Tower, where at Midnight it would signal, to have new plans of new projects to build. People begin to warn about falling sleep on the grounds of this house, because the House won’t protect you. And as we progress, Clyde learns the hard way of going down in the basement… alone.

Chapter 3: Alive tells us about the railroad business, previously that was gonna be mentioned last time. Issue Alive isn’t misleading, or some sort of cryptic message. Instead think of it has a way of surviving a miraculous approach of putting fear into somebody, even if that went to kill to get the message across. Like the man behind the railroad plans, which the house is in the way of it’s construction. The Winchesters are also making a getaway of storing some “cargo”, making sure he’s safe and sound. Because poor Clyde, was there at the wrong time. Like the previous issue, they mentioned how the “House won’t protect you.” But what if a family member was in danger? Well, the house would in fact… react.

That was the first Volume of the stories of the Winchester House, and it sounds like a Volume Two will be coming as well. Possibly for another three issues, as they are trying to pinpoint specific events. And bring the stories up to speed so that nothing important, in comic form is missed. As everyone is limited to pages and how much is on a page. The artwork bounces around smoothly that almost seem to dance with other pieces, like I mentioned in the Hundred Year Curse One-shot, pages without the typical borders or frames. Makes the artwork pop as if it’s more pleasing to our eyes. Joshua and his team are doing a fantastic job, and I can’t wait for the continuation of Sarah’s story. If you love this story, or even if you’re new to this mysterious tale of a House Built by Spirits. I’d highly recommend keeping those spirits at bay, and read about them now.