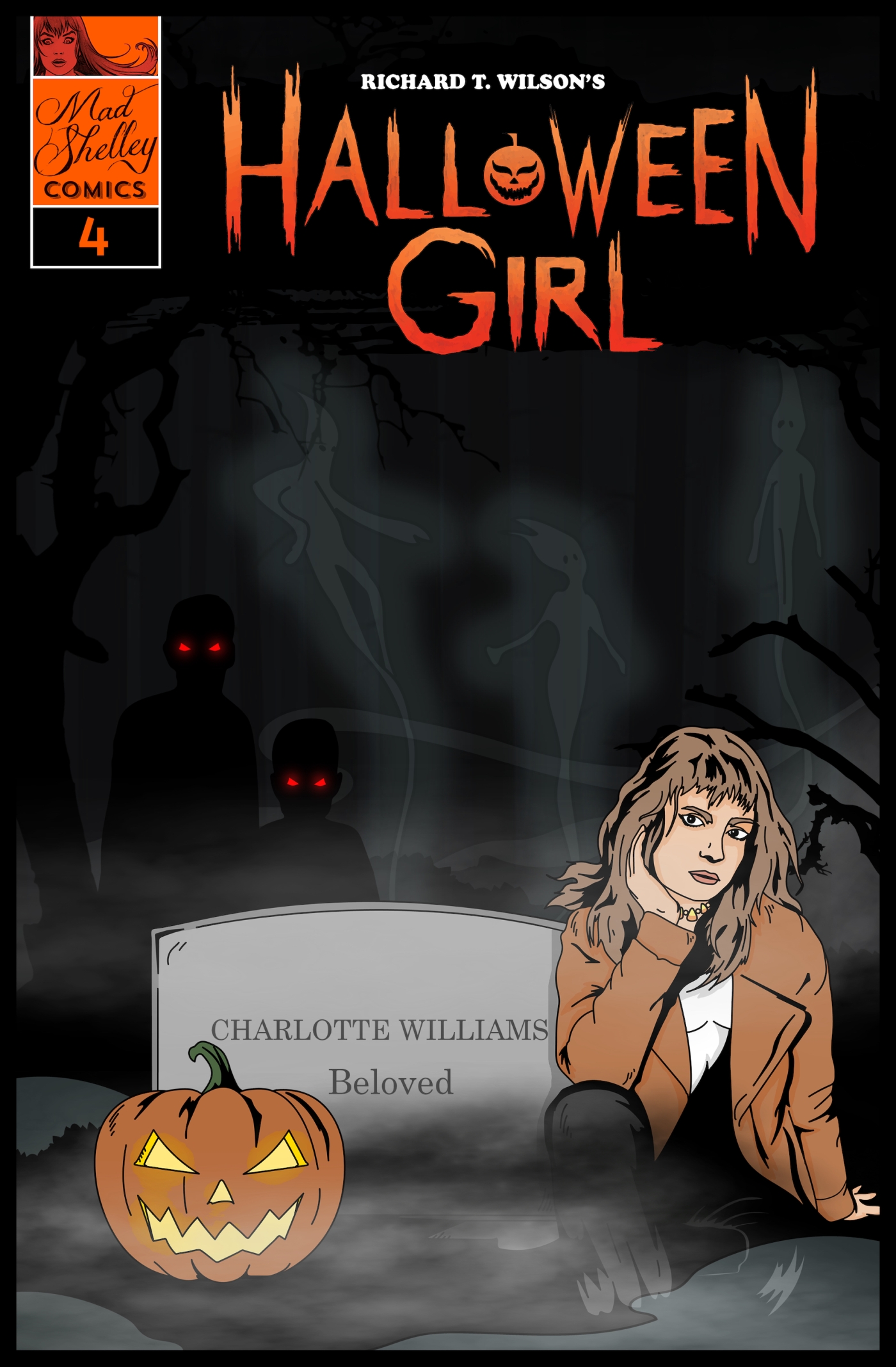 Halloween Girl Comic series by Mad Shelley Comics returns with Issue 4 to be released on August 31st 2022 and available here to pre-purchase on Amazon! Please read on to know why it’s a must read!

Angsty, teen ghost, Charlotte (aka ‘Halloween Girl’) and supernatural gal pal, Poe battle diabolic, secret society, The Hollow for the soul of Crystal Springs – and their own salvation.

‘Death is a lot of damned work’, thinks 18 year old ghost, Charlotte Williams, as she braves the unsettled world of the In-Between. It’s here the rebellious teen finds the clues she so desperately needs in her battle against diabolic, secret society, The Hollow (who took her life, and just happen to be trying to end the world!).

Upon her return to the ‘Bone Yard’ (aka Crystal Springs Cemetery), Charlotte meets up with 20-something supernatural bestie, Poe, an acerbic goth who works with her to decipher the latest clues. Fellow ghost, Poe is something of a big sister to Charlotte; strong, hilarious – and always full of secrets. Though Charlotte’s already been dead several years, Poe, on the other hand, may be as old as time! As past victims of The Hollow, both are now intensely dedicated to stop the evil sect, who chillingly view human existence as a ‘failed experiment’.

After several fraught run-ins with ‘the Devil’s janitors’ (as Poe calls them), Charlotte is devastated when The Hollow kidnap her young son, Luke, in retaliation. Charlotte then suffers with the guilt of screwing up his young life ‘even in death’, before forming a plan with Poe to get him back – and make The Hollow pay.

Ultimately, Charlotte and Poe are forced to cosmically separate in their search for Luke. However, in doing so, they’re both severely tested and must grapple with their limitations – and their own dark pasts. Along the way, we meet a string of colorful characters both in ‘Hollow Land’ and the All-American (or is it?) Crystal Springs – and maybe even save the world.

Poe is forced to reveal the truth about her relationship with Jason and their former lives together – as Hollows! Will this shocking revelation tear Charlotte and Poe apart – can they still work together to rescue Luke…?

Do friendships and love last even after death? How do spirits feel and what’s going to happen to our protagonist’s story? All of these questions are answered along with a thrilling and endearing ending in this 4th issue of Halloween Girl comic which is set to launch on August 31st 2022.

The horror comic starts off where the 3rd issue ended and we see our protagonist- Charlotte, planning to rescue the abducted child. Along the way, Charlotte discovers the past of her friend Poe who never revealed it till now. The way the things are revealed is shocking and provides horror value. The next strong point of this comic issue is the outcome of the kidnapping story arc. The comic ends in a satisfying way with no strong cliffhangers but a hint that more trouble might be lurking ahead. This issue lives up to the hype and makes you more invested in the world of Halloween Girl which is wonderfully created by Richard T. Wilson and made alive by the art of Wanderer Luna. The cover art by Kadu Ferraz works well to make you eager to open and read this comic!

When it comes to content, the comic book is full of beautiful illustrations which look realistic yet have artistic feel to it. Even though it is in black and white, the effect it leaves on you is perfect for the type of suspense thriller horror it specializes in. There are no swear words, nudity and suggestive themes. Thus, making it a great read for teens and above.

In conclusion, Halloween Girl 4 is thrilling, satisfying and is among the best comics you will read because of the well written characters which stay with you even after you finish the comic.

Highly recommended to add this in your collection when it gets published on August 31st 2022 (Pre-purchase has started now!)

WRITER: Emmy® Award Winner, Richard T. Wilson serves as the President /Writer-Filmmaker of RTW Productions, Inc., home to nationally recognized educational film company, OutreachArts, Inc. and its award-winning, sister company, Mad Shelley Films/Comics (‘Under the Flowers’, ‘The Halloween Girl’ film & graphic novel series). To date, he has had over 70 of his plays and films produced and seen some this same work featured on ABC World News Tonight, National Public Radio, PBS and The Independent Film Channel. However, Wilson is probably best known for creating both the critically acclaimed, multi-award-winning TV/DVD series, ‘Maple Ave’ and the hit, supernatural web series, ‘Under the Flowers’.

ARTIST:  Wanderer Luna is a Russian digital artist. She began to draw from childhood, received an art education, and as a result, drawing became her life’s work. Her drawings and comics are popular mainly outside of her homeland. Her favorite themes in drawing are fantasy, science fiction and fairy tales. Summing up her reasons for creating, Luna says, “Art is necessary for people, as it helps to find light in the darkness even in the most difficult times.”

COVER ARTIST: We welcome back Kadu Ferraz, for more of his amazing cover art! A huge fan of retro, pop culture and music, Kadu, 20, has been working professionally since 2015.

Get your copy of Volume 1 from here- Amazon

Get your copy of Volume 2 here- Amazon Page

Get your copy of Issue 3 from Amazon

Horror Needs You! Please Donate via PayPal to help the noble cause of promoting horror genre & indie horror creators:– http://paypal.me/ehpodcasts